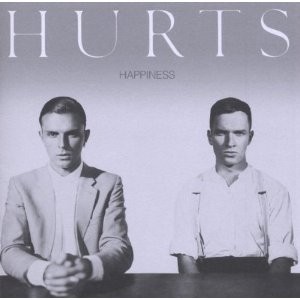 And so the ’80s revival continues apace with Hurts channelling what some will consider the best bits of that particular decade. Others will shake their heads and wonder just what we have to do to get rid of this kind of thing altogether. For those who remember the ’80s as a horrific era of shoulder pads, terrible synths, and appallingly overproduced disco tunes, Hurts will no doubt inspire a blank expression.

However, even those who bear a grudge against ’80s pop should at least be able to admire the craft of Happiness. Everything about Hurts’ output so far has signalled incredible attention to detail. One glance at their artwork suggests an appreciation for pretentious photography and a sturdy grasp of the notion of style over content. Vocalist Theo Hutchcraft and cohort Adam Anderson know how to cut an interesting pose, particularly in black and white. With sunken cheeks and pinpoint stares a genuine sense of drama exudes from their photographs.

Musically, Hurts are not messing about when it comes to assimilating the sound of the early ’80s either. The production might benefit from 21st century tinkering to create a sonic palette so smooth it glides from the speakers, but everything else here feels authentic to the period.

Those fearing the opulence and Thatcherite playboy excesses found in the likes of Rio or Spandau Ballet‘s later work can rest easy for the time being. Instead, it’s the melancholic sounds of Ultravox circa Vienna or early Tears For Fears that are being referenced most clearly. As such, there’s a melancholy seam that runs throughout the album that, in conjunction with the polished production, succeeds in achieving a glacial grandeur to each of these songs.

This mood is sustained by the vocal affectations of Hutchcraft, who croons with a sincerity so intense that it borders on parody. Dig deeper, and the lyrics to the likes of Blood, Tears And Gold or Wonderful Life disappoint. There’s no existential angst here, no fear of nuclear devastation, and curiously not really much in the way of frustration at being on the dole for a year. If only they’d studied the arch wit of Neil Tennant rather than simply borrowing the Pet Shop Boys‘ sound for the likes of Better Than Love there’d be some substance rather than these mundane tales of love and devotion.

This lack of depth is almost balanced out by some sterling work by Adam Anderson. Sunday mixes Eastern Bloc industrial pomp with Eurovision disco pop to surprisingly engaging effect. The creeping gothic balladry of Evelyn calls to mind Sisters Of Mercy and Depeche Mode, getting the mix of melodrama, soaring strings and pounding drums spot on. Stay cribs the rhythm of Chariots Of Fire and marries it to some quite epic backing vocals. It’s awash with the kind of emotion you’d find in an end-of-season montage and the payoff comes instantly with the chorus.

It’s this capacity to write immediately affecting songs coupled with an effortless cool that will see Hurts catapulted towards stardom. The fact that the album tails off dramatically with a series of appalling ballads in the shape of The Water and Unspoken will almost certainly be overlooked in favour of the classy sounds of Wonderful Life or the glorious pulsing anthem of Better Than Love.