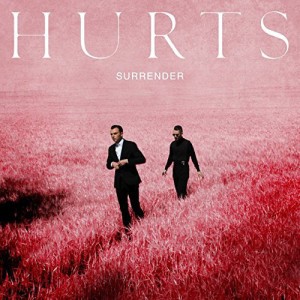 When Hurts emerged at the start of the decade, they looked the full package. In the best synth-pop tradition (Pet Shop Boys, Yazoo, Erasure), they were duo comprising a vocalist (Theo Hutchcraft) and a synthesist (Adam Anderson); they had a strong, defining look (accountants at Berghain, basically), an austerely excellent name and, crucially, a clutch of sturdy pop hits in the form of Wonderful Life, Stay and Sunday. The album, Happiness, duly went top five.

But perhaps the biggest influence comes from a man whose name appears nowhere on Surrender’s credits: Sam Smith. These 10 tracks often feel like they’re aping the blues-lite seriousness of Smith’s monumentally successful music. In the process, much of which made Hurts such an appealing prospect has been smothered under musical bluster and portentousness.

Weight Of The World is the most Smithsonian thing here, a plodding ballad of immense tedium. But even the uptempo numbers feel leaden: the Eurodisco stomper Nothing Will Be Bigger Than Us is a poor man’s We Found Love; Rolling Stone is torpedoed by a clichéd narrative of a hellraising female subject (“Daddy was an alcoholic, her mother was an animal / Now she’s living like a rolling stone…”); Why, meanwhile, is so riddled with clichéd, stock imagery (“If this is love then why does it hurt so bad?”) that Hutchcraft might as well have sighed the words “Will this do?” over and over again into the microphone.

There are some bright spots. Lights, the Nick Hodgson co-write, has a lightness of touch that’s sorely missed from the rest of the album, with its funky clavinet backing and coy, falsetto vocal from Hutchcraft. Kaleidoscope’s yacht-rocking guitar and neat countermelody show that Hurts haven’t misplaced their pop chops. Wish – the Sneddon co-write – is a lovely ballad that boasts Hutchcraft’s best vocal performance yet.

The most out-there track on Surrender is tucked away as a bonus track. Policewoman, to its credit, foregoes all subtlety. It’s a gospel choir-assisted ballad with an amusingly David Brentian civil disorder metaphor leading to the killer line “my light shines red and blue” and ends with a deeply weird, borderline atonal coda.

Sadly though, the fact that Policewoman isn’t included in the main tracklisting is consistent with the pervasive bet-hedging that ultimately sinks Surrender. Hurts can do – and have done – better than this.