I Am Oak – Nowhere On Tammensaari 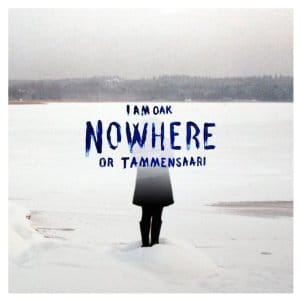 Some may say that it’s about time we realised that there’s more to Nordic culture than gripping crime drama. If the recent BBC4 import The Bridge had you googling Choir of Young Believers’ soundtrack then maybe your curiousity is prepared to extend to other European musicians. Enter I Am Oak, aka Dutch songwriter Thijs Kuijken, with this disc recorded in Northern Finland.

Joined for the first time by a band, Kuijken has recorded a dozen tracks of simple, sparse beauty, embracing the coldness and fragility of the Nordic landscape. This transitional phase for Kuijken is encapsulated in the album’s title; he’s between the loneliness of “Nowhere” and Tammensaari (literally the Island of Oaks). The band themselves form more of a choral contribution with subtle and restrained orchestration adding to the mix. The frigid atmosphere, enhanced by the snowbound cover makes this a lush, but slightly chilly listen.

Highlights include opener Famine, with Kuijken’s vocals and playing cutting through the silence like a knife before being gradually joined by the rest of the band. Marrow is also splendid, as is Reins where we hear everyone collaborating on the album’s most epic moment. The last two tracks work really well together. Vares Varsas is a brooding and intimate duet with ominous thunderclouds looming in the lyrics and Everything In Waves ties up the whole bundle well, echoing off into the far distance.

Although there’s a lot to like, there are a few minor faults that hold this disc back from true greatness. The album itself is of perfect length, but some tracks barely scrape two minutes. Although these work well and the majority don’t feel needlessly curtailed, they run the risk of being filler in among the lengthier highlights. I Am Oak definitely earn their spurs with the other tracks, but there’s a nagging feeling that this disc is a beefed up EP rather than an album proper, and it’s these brief moments that arguably cause the album to sag a little in the middle.

If this album was a car journey then it’s a steady cruise with beautiful vistas out of the window; but after a while you crave more in the sonic landscape. I Am Oak are certainly not travelling on the road to nowhere, but a more varied route would have elevated this disc further. Minor gripes aside, this is still a trip worth taking – just remember to pack a sweater.

I Am Oak MP3s or CDs

I Am Oak on Spotify

More on I Am Oak
I Am Oak – Nowhere On Tammensaari