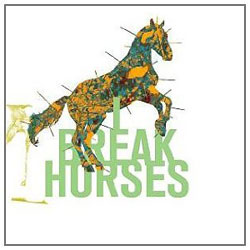 However you take to Hearts, the debut full-length from Sweden’s I Break Horses, there’s much to admire in their revitalised nu-gaze. As a scion of a great, if faded legacy that runs through Slowdive and The Jesus And Mary Chain, there’s no revelations in the yearning, emotionally charged slow-burn of what Maria Lindén and her cohort Fredrik Balck have pulled together, nor in the fact that those headier moments are tempered by an often pedestrian simplicity. But the thick layers, the anguished sonics borne out in subtle electronica, the aspirational potency of their sound is something that will surprise. And in the depth of that mix you glimpse what they explored to create, over a painstaking three years, a debut of exquisite virtue.

Nordic pop-fanciers will already be familiar with the album’s opening brace – the twinkling gasps of Winter Beats and the rousing (and now title-track) Hearts gave a teaser to the Stockholm duo’s intent earlier in 2011. Their sense of giddy turmoil – excitable, cascading synths that danced around Lindén’s hazy, muted vocal – is the defining feel for the album, even if these do have an immediacy that fades in the more generic, later tracks. Yet what’s also clear is that they’re not isolated singles shoehorned into a later album, but a thematic, and melodic print for the vision Lindén harboured throughout its creation. Their sense of the hopeful borne of the prosaic, the effusive verve somehow teased from the strictures of shoegaze, extol a sense of youthful possibility. Of looking outside the grind to what lies beyond. Of joy in the life to come. And they do it with the eponymous heartbeat.

As a sample, the beat recurs through the album – providing pace, depth, bass. But it also seems metaphorical for the music and Lindén’s take on life. While they’ve nested Hearts in nu-gaze’s repetitive, linear feel – at times methodical, even mundane – the beat pulses with a determination that ultimately leads to vitality. A persistent drive. A will to exist. I Break Horses capture the genre’s feel of the fundamental, the baseline, and lean heavily on those that did it effectively before. But they do it with a sense of the possibility – hopeful synth riffs, loving sighs, twinges of sparkling angst – and well-placed diversions towards the more ethereal realms of The Cocteau Twins et al. In their ability to find the majestic in the dour, I Break Horses have set themselves apart from both their generic forebears and their Nordic peers.

Acknowledging their influences has also allowed Lindén and Balck to add their own touches, to progress, without losing their root sound. Load Your Eyes courts a My Bloody Valentine sobriety, a Slowdive denseness, but also flickers with a staccato beat and drifted vocal pulling the track at either end. Cancer finds a similar smoulder to Erika Anderson‘s recent outing, albeit with the South Dakotan growl toned down to a beatific purr, while Load Your Eyes and I Kill Your Love, Baby! look more to the minimalism of The xx, leaving space where the other tracks fill in (though neither can ultimately resist the allure of the crescendo, and here there’s even a taste of a Sigur Rós spirituality). All that is not to say that Hearts ever strays far from the shoegaze mould, but there is freedom from it – if only in the nuance. It’s a subtlety gently revealed, a fillip to an otherwise straightforward album that lets it reveal its depths with added grace.

Hearts is not an album of change, but one that revels in the joy of what you know. I Break Horses’ references are clear, but so is their sense of themselves: hopeful, life-affirming, desirous of more. You won’t like everything they have to say, but if you share their goals then you’ll also love how they get there. This is one to embrace.