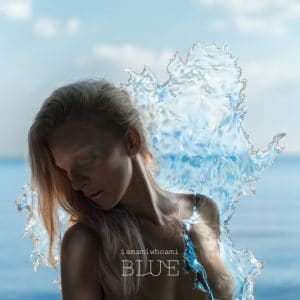 The innovative online video campaign for iamiamiwhoami’s first project Bounty, initially hinged on the mystery of who was behind them as much as the absorbing textural world of the videos themselves. Eventually revealing themselves as a collaborative outfit comprising performer Jonna Lee, producer Claes Björklund and directors collective WAVE, a second project Kin arrived online, followed by semi-conventional physical releases for both sets of tracks and videos.

However, having successfully established a relatively small, but feverishly dedicated audience, a question mark over their future hangs heavy in the air. Will a cult audience be enough to sustain the production values of their beautiful videos (rumoured to be heavily subsidised by the more philanthropic corners of the Swedish music industry) in the long term? After choosing to present themselves so firmly as an audiovisual outfit, it seems only fitting to review Blue in those terms although, frustratingly, advance copies have given access to the music, but not the three videos that remain to be released online.

While the two previous sets of videos entranced and disturbed in equal measures, Blue jettisons much of this mystery in favour of an oceanic transparency, perhaps in attempt to start a fresh, clean slate after the disturbances of Bounty and Kin. The result is a contribution to the emerging genre of music video best described as ‘National Geographic porn’, with the beachside settings for each video passing from Iceland to more exotic tropical climes on their travels. Bon Iver, who debuted their ‘Holocene’ video on the National Geographic channel, went on to release a low-budget video album on YouTube, whose images managed to capture the scintillating micro rhythms of the music far better than Blue’s.

The seven videos released so far have an unfortunate tendency towards expensive looking helicopter and crane shots, encouraging comparisons with a recent spate of glossy dance videos from the likes of Calvin Harris. The thoughtfully designed textures of their first videos are sacrificed for wide, open vistas, which curiously fail to accentuate the expansiveness of their electropop soundtracks. By the fifth video, the aerial shots of waves and black Zentai suited goons flapping around on the beach are already starting to prove tiresome. The unfortunate effect on the music is to frequently render it less Scandinavian/South Seas mystery and more Ibiza club vacation.

Which is a shame as, while Blue’s electropop soundscapes are hardly a great move forwards from their first two projects, there are genuinely majestic emotional moments to savour here. The icy grandeur of ‘vista’ is one of the collective’s biggest musical moments yet, while ‘thin’ layers banks of arpeggios over shifting rhythmic plates that even at times hint at a move in the direction of R’n’B. In ‘chasing kites’, for once, fully intelligible lyrics and straightforward synthpop even start to suggest the possibility of a radio hit though ‘blue blue’ courts disaster by sailing too close to a new-agey trance blandness for comfort. Whether all this is an attempt to nudge towards the mainstream, or a purely artistic decision (likely to be the latter given the integrity demonstrated so far by Lee), the result is the same: a perplexing tendency towards vapidity. The worrying conclusion is that, just like her performance in the videos, she may be treading water with this project.