by Aaron Payne
published: 30 May 2013 in Album Reviews
Tweet 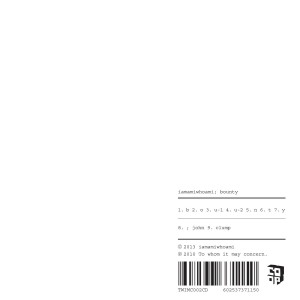 Considering that the internet is drowning under the weight of pornography and gossip websites (it is; we’ve looked), it feels like a miracle that something like iamamiwhoami exists. bounty is the ‘prologue’ to last year’s kin, and brings together in one place/object the previously released multimedia series that had surfaced before kin was released as iamamiwhoami’s first album proper.

Between 2010 and 2012, beneath a cloak of anonymity and all kinds of mystery, iamamiwhoami released what could best be described as music videos onto YouTube. Anticipation built as a debut album came ever closer to a release, and an equal amount of frustration brewed as it was continually pushed back. Eventually, kin was released; an album of previously unreleased material, well received by just about everybody.

bounty is a sort of official release for what came before, the ‘prologue’, released as a dual package of either CD/DVD or LP/DVD. There was a tendency amongst music critics at the time of release of kin to praise iamamiwhoami for the fact that the music stood up well without the visuals. That seems sort of irrelevant, like saying a toothbrush tastes nice without the toothpaste. You can listen to bounty, but you’re better off watching it too. That is, after all, the point. Of course the problem for the critic is that it pushes them far out of their comfort zone. Luckily, again, with this filmmusic, that’s also the point.

During many of the sequences, a man in white pants indulges in various darkly sexual activities, which goes some way to explaining the presence of a strange white liquid held in what look like jam jars. It could be milk, or PVA glue. It probably isn’t. This strange chap is some kind of king, whose obsession lies with the main character of the series, a woman who is on the whole indescribable, although a fantastic dancer. Watch the videos – they’re difficult to decode (and in some cases impenetrable) but utterly compelling. They’re particularly strange examples of music videos; indeed, it feels as if that title doesn’t really do them justice. But it’s nice to attempt to ground the whole thing in the familiar.

The music, then. It’s unmistakably Scandinavian – isn’t everything brilliant and interesting in pop? Think of Fever Ray, and then track several shades paler, less oppressive and prettier. iamamiwhoami is just as weird, but it’s a different weirdness. The last album by El Perro Del Mar, during its more successful moments, has the same lightness of touch: bounty paints similar structures in a deep blue-black. It sounds a little like a thousand copies of Donna Summer’s I Feel Love being melted down and refashioned as a dirty bomb. Possibly.

bounty is wonderfully idiosyncratic – the whole thing holds together in an indefinable way that ultimately comes down to iamamiwhoami sounding far more like themselves than anybody else. The mood changes on bounty almost as often as the track number but never at the expense unity of vision. There are certain tracks which are fairly overtly designed for the dancefloor: u-2, o, and t are loud, muscular and utterly irresistible. They’re necessarily immediate (always an asset on a dancefloor) but by the time you’ve heard them twice they command your legs in a way that’s a little worrying. Conversely, u-1 and b have a gentle, even vulnerable, edge to them.

bounty is an album to be continually surprised by, for those who already know it as well as those who don’t, especially if it’s given the chance to perform on video as well as vinyl. Yes, it’s true, the music stands up more than well by itself. But this is an album designed for listenwatching. So listenwatch.