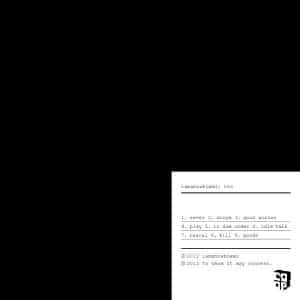 Described by its parent as ‘nine months of hard labour’, Kin is the first album from Swedish duo Jonna Lee and Claes Bjorklund, better known under their cryptic and questioning moniker iamamiwhoami.

With a band name that implies a bit of core emotional insecurity, it would be reasonable to expect their music to be fragile and shot through with doubt, but that is absolutely not the case with Kin. There is a polish and an assurance in a song such as Drops that makes a strong impact, giving the duo the firmest possible base from which to build. There is a sense of space to this music too, a wide perspective to the production that is complemented by the rhythmically driven drum track.

The textures are dark and frosted, and Lee’s voice is shot through with a chill that brings to mind two very different ice maidens, namely Liz Fraser and Siouxsie Sioux. It is perhaps inevitable that fellow Scandinavian Fever Ray should crop up as a comparison point too, but the parallel is a flattering one to both.

It’s easy to picture moody opener Sever as a potential torch song and opener for a tense Scandinavian detective series, its moody production panning out to widescreen. By contrast Good Worker has an incredibly warm sound, and sets a seductive atmosphere, while In Due Order has a sharper cutting edge. Play, meanwhile, continues the trend for electro music rich in R&B influences and beats, but does so very well, with a liquid synth line and strong vocal, a bit like Purity Ring minus the vulnerability.

The only caveat with the music of iamamiwhoami is that there is now a lot of R&B influenced electronic pop music around, increasingly from Scandinavia, and it seems to be the ‘go to’ sound of left of centre pop music in the middle of 2012. The good news for the duo, however, is that their particular take on it puts them right near the front of a crowded field.