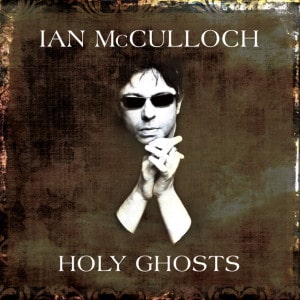 Released midway through an Echo & The Bunnymen tour that bewilderingly has them playing second fiddle to ’90s Madchester outfit James, lead singer Ian McCulloch’s Holy Ghosts is another curiosity in itself, consisting of two discs – a fan-funded solo album by the name of Pro Patria Mori (or die for one’s country in plain old English) along with a live album featuring orchestral reworkings of classic Bunnymen tracks plus older solo material.

Backed by an orchestral quartet rather than a full orchestra, McCulloch’s live show also featured fellow Liverpudlian Ian Broudie, driving force behind The Lightning Seeds and ex-Bunnymen producer, and was recorded during McCulloch’s live tour of 2012 at the Union Chapel, London.

Opening with one Bunnymen classic in the shape of Bring On The Dancing Horses and concluding with another favourite, Lips Like Sugar, the live offering brings a whole new style to some old songs; in truth, the entire show is more of a stripped down acoustic set with the addition of drums and occasional strings rather than a full on orchestral reworking. McCulloch’s legendary vocals have never sounded clearer, freed from the constraints a full band can impose on a singer – they occasionally falter but as a whole it is an impressive performance from the ex-Crucial Three member.

The atmospheric effect that the strings add is occasionally electric and is used sparingly to create dramatic sections at key points, but the effect that this has varies from song to song as some are more receptive to this treatment than others; classics like the opener, early single Rescue, Angels And Devils, The Killing Moon (the best song ever written according to McCulloch himself), and new song Watch Me Land are amongst the tracks that benefit the most from the strings, with the older tracks having new life breathed into them. Many of the original versions of these songs, however, already contain huge emotion and power and without Will Sergeant’s intricate guitar weaving in and out as well as the full Bunnymen band sound, it often feels that something is missing; the lack of variety is also detrimental to the album as a whole.

Pro Patria Mori eases itself into being with something resembling a lullaby in Different Times, a subtle and gentle song that bears no resemblance to the music most associated with McCulloch. This proves to be a common theme with minimal instrumentalism prevalent throughout, and very little in terms of tempo change; the synth strings of Empty As A House and the piano driven Raindrop On The Sun offer occasional deviations from the regular formula but there is often annoyingly excessive repetition of lyrics on tracks such as Lift Me Up, which concludes with approximately 25 continuous iterations of the title (and chorus).

Watch Me Land is a clear highlight with an instantly memorable and catchy chorus that elevates itself above the rest of the pack, and the equally satisfying Me And David Bowie pays homage to the living legend with brief nods in the direction of The Kinks’ Waterloo Sunset, bouncing along with tambourine and acoustic guitar and boasting an interesting instrumental break with staccato brass synth in the style of The Lightning Seeds’ Pure.

Whilst there is not a single bad track to be found amongst both halves of Holy Ghosts, there are only occasional highlights; the constant easy going vibe that both bring is far removed from the post-punk pop power of Echo & The Bunnymen and is a worthy companion to an easy relaxing night in, but ultimately both recordings can only occasionally offer something more than this.