by Ross Horton
published: 4 May 2018 in Album Reviews
Tweet 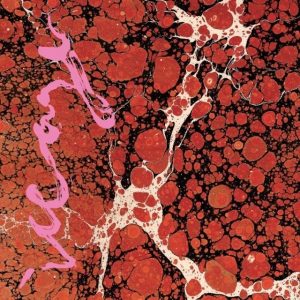 Iceage’s triumphant, glorious new record Beyondless is a luxurious, decadent splodge of punk that pushes at the confines of their listeners’ hitherto unexplored psychic impulses. Sure, there’s Bad Seeds cabaret, Gun Club fervour and a wretched, Pogues-y reek of freezing toilets in a horrible bar somewhere from Copenhagen to infinity. But, as Iceage are wont to do, there is a cumulative swelling of influences to where the band seem on the brink of a tipping point. One moment you can hear the cocaine-dusted glitter-blues of Goat’s Head Stones, the next a swathe of antique John Cale-ian strings.

It’s fair to say that this highlights how Iceage have taken an odd career trajectory, in many ways. Their first record sounds – still – the most contemporary. Its rhythmic dynamism and raw power bear the hallmarks of modern hardcore and the sharpest of modern metals. Far superior sequel You’re Nothing plunged back into the dawn of noise rock and industrial for inspiration, while career-best Plowing Into the Field Of Love harkened back earlier still to the Gun Club and the Birthday Party.

That said, this is as close to the spirit of punk as you’re likely to hear this year (or any year) – it’s hard to see Elias Bender Rønnenfelt and co giving a shit what you think about them or their increasingly fashionable influences, as they wade through the murkiest waters to ever leak out of the brown, greasy orifices of rock ‘n’ roll.

Opener Hurrah kicks the record off with slimy, bottom-heavy (capital r) Rock ‘n’ Roll – and it’s immediately noticeable just how much the sound of the band has improved. Punk legend Richard Hell said as much in the presskit – and of course he’s completely correct. It sounds like a million dollars. A raspy, sulky Sky Ferreira shows up on the next track, Pain Killer. Sonically, it’s a mixture of muscular post-punk and transcendent horns blasting through the speakers. Under The Sun is suffocatingly dense – as though you’ve walked through the curtains of a decrepit theatre only to awaken centuries of dust.

Album highlight The Day The Music Dies rides in on a monstrous, leather-clad groove, only to be tempered by maddening layers of percussion, guitar and Rønnenfelt’s lusty croon. Sonically, it’s almost completely overwhelming. Another highlight is the utterly hilarious Showtime – where Tom Waits cabaret-sleaze is matched by Rønnenfelt’s unfettered, begging yowl. But arguably the bravest choice of the entire disc is the decision to have the instrumentation of the title track be an unbearably intense barrage of progressive black metal. By this point, the game is up: they’re playing with us, and we’re begging for more – Rønnenfelt cast perfectly as his beloved Marquis de Sade.

A quick note on the volume of the record – it is, at times, almost comically loud. Not loud in a digitally-boosted, Loudness-War way full of digital distortion and other unattractive noise. It’s loud in a way that you’d expect a band to play if it was their last night on Earth. The noise is cathartic, the waves of disorientating racket are almost narcotic in their potency. Each and every stylistic decision here seems intent on releasing the listener from reality for however long they tuned in.

God being dead, and irony being rollickingly alive – Iceage have casually birthed a monster. It’s undoubtedly their best record, and it will almost certainly reveal layers of intrigue with each listen. On Day Of The Lords, Ian Curtis once sang that there was “no room for the weak”. It’s almost as though Iceage took that as a challenge.