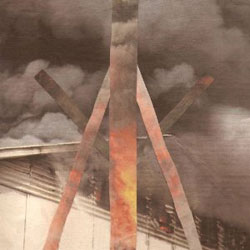 By all accounts, Denmark’s Iceage are kicking up a storm live. Reports across Europe and the States speak of moshpits, bloody noses, and sell out crowds. Meanwhile, one website – as if such an event were a novelty – breathlessly recalls that “at one point somebody sprinted onto the stage and then dove off back into the crowd and the people in the front caught him”.

It’s easy to mock. But there’s something naggingly inauthentic about Iceage – not necessarily the band or their music, but the slightly suspicious rise to the top of the hype pile, the welcome embrace from the hip corner of the web, the arty blog, the Fred Perry shirts, the somewhat sparse tattoos. It’s Instagram Punk.

But New Brigade is also a pretty fine debut. It’s reminiscent of Idlewild in their “flights of stair falling down a flight of stairs” era – not in the sonic twin sense, but in the ramshackle clang of youthful energy, and most of all in the glimpses of melody lurking beneath the chaos. It’s not clear whether they’re trying very hard to keep up with their own breakneck tempos, or trying very hard to sound like they need to try, but the results are so genuinely exuberant that it’s impossible not to give them the benefit of the doubt. Similarly, accusations of racism have been levelled at the band from some quarters, but there is no evidence here to support this, even if White Rune may be a song title they come to regret.

There is some true variety here amongst the British accents and crude rhythms. Rotting Heights’ lo-fi blastbeats reference the Scandinavian black metal scene, and at the other end of the scale, the quieter sections of Remember could almost be lifted from The Drums; it’s not just a sharp pair of cheekbones that Elias Ronnenfelt shares with Jonathan Pierce. Meanwhile, White Rune catches its breath halfway to launch into a scratchy Black Sabbath riff, and closer You’re Blessed is a production makeover away from pop-punk.

In fact, the success of the album lies partly in the production, which allows the teenagers close to the limits of acceptable disorder, but reins them in and lays on the quality when needed – a brief hook here and there, as in the excellent title track, the odd searing guitar line or drum fill. But it’s clear that there’s talent here that has the potential to be startlingly good, if they stay the course.

Because have no doubt, they are going to be hated as much as loved. They’ve conquered the trendier end of the market, but you’d be hard pressed to find their name written in studs on a leather jacket. They’re young. They’re pretty. But maybe a little adversity will do them good – no-one wants their punk bands comfortable. Keep them on their toes, and this Iceage may be around for a while yet.