by Matt Cotsell
published: 8 May 2021 in Album Reviews
Tweet 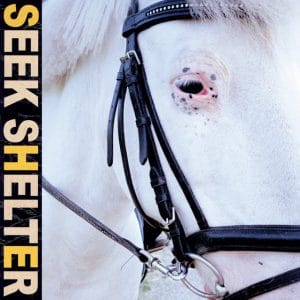 Ten years later and the sleazy high-octane carburettor rock that made their early records so distinctive and exhilarating has largely been discarded in favour of arena ready solemnity and gospel flecked indie anthems on Seek Shelter, Iceage’s fifth long player album. The Copenhagen punks have skated over to the venerable Mexican Summer label, after putting out 2014’s Plowing Into The Field Of Love and 2018’s Beyondless on Matador.

Calling in superfan Pete Kember, known to fans as Spacemen 3’s Sonic Boom, to assist the group’s trusted engineer Nis Bysted with producing and recruiting guitarist Casper Morilla Fernandez to thicken out their ferocious sound, the band have effectively reined in their fastness but kept the majority of what made them so furious.

Choosing to record in Namouche, a sodden and run down studio in Lisbon for a week and a half, with Kember, the relentless dampness of their surroundings has permeated the record. It opens with the furrowed Shelter Song, with glowering frontman Elias Bender Rønnenfelt surveying his immediate landscape, looking for respite from a torrent of criticism, joined by The Lisboa Gospel Collective on the songs sympathetic and impassioned chorus. High & Hurt that follows is a barreling, idiosyncratic and infectious post punk garage collision, that feels as if it was cleaved from Jonathan Fire*Eater’s snarling Tremble Under Boom Lights EP and references the 1907 Christian hymn Will The Circle Be Unbroken? that Kember had previously recorded as a Spacemen 3 B-side.

The choir’s back on the enchanting Love Kills Slowly, a maudlin grease stained bruiser with Rønnenfelt relishing as he languishes in dejected mode, the rest of the band Jakob Tvilling Pless, Johan Surrballe Wieth and Dan Kjær Nielsen and new guy Fernandez providing a thunderous production that swells around him. Kember’s influence is most evident on the shuffling Madchester psych aggression of Vendetta, which references the track Broken Bone from their debut New Brigade as well as Ponzi schemes and Mafia loyalties as Rønnenfelt threatens “I’m gonna getcha.”

The ambitiously jazzy finger-snapping on Drink Rain finds the band driving the furthest away from their original sound, being as it is, a confident piano and sax fronted chanson, with Rønnenfelt dryly spinning his lyrical fingers round a dirty martini in some dimly lit Montmartre speakeasy. Grabbing his jacket and bursting out for the barren godlessness of the American desert, on the bristling harmonica driven Gold City the band race through their take on country and Americana. The rumbling Dear Saint Cecilia, a west coast fizzer, finds the Danish rockers outrunning their own momentum, and on the menacing lament The Wider Powder Blue the band channel their inner Bad Seed noticing “the blood needs to flow free”.

The group find suitable refuge on the gratefully murky and emotive closer The Holding Hand as the rains that previously blighted them, begin to let up and the sun starts to breaks through. Exploring increasingly adventurous songwriting terrains and expanding their studio capabilities whilst managing to retain some of the fire that once sparked up their engines, Iceage have delivered another tour de force.