Idlewild – Everything Ever Written 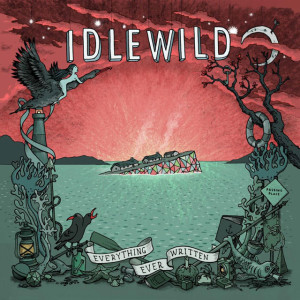 Six years is a hiatus by anyone’s standards, but it does give one time to think. Until 2009, Edinburgh’s Idlewild had released six albums in 15 years, riding the tail end of brit-pop and mid-noughties indie-rock since front man Roddy Woomble bonded at an Edinburgh party with drummer Colin Newton way back in the mid-’90s.

As people, (and those in bands are of course people too), get older, sometimes it makes sense to stop and reflect. To mature. At their inception Idlewild were like unfettered teenagers with growing pains. On albums like Hope Is Important or 100 Broken Windows they produced a raucous din of angular guitars and aggressive punk-pop for a generation of late-’90s kids too young for peak Oasis but not yet watered down by generic stadium indie. Their live shows were mini-riots, Womble a willing pied piper leading the kids into a destructive dance of blood, sweat and tears.

The new millennium gave them an opportunity to find their oeuvre and they embraced melodic folk-tinged guitar rock. Filtered out on albums The Remote Part and Warnings/Promises was much of the raw aggression of before, the band had grown up, written some happier hooks and in turn found a place in the mainstream. Playlisted on Radio 1, hitting the Top 10 and supporting stadium bands like Coldplay – the teenage riot refined into twenties intellect, albums featuring poet laureates and commercial success.

As its members approach their 40s and the band reaches its 20th anniversary, Everything Ever Written is another shift in tone and musical style. It sounds more grown up, more reflective and more sincere than their previous work. Its tracks build rather than career into your ears and it is shamelessly introspective.

Opening song Collect Yourself has a title that could also be a chapter from a self help book and has Womble singing about being “young, but only for a moment in time”. The guitar riff sounds like Wilco – slightly scuzzy with a country twang.

A quick glance at the other titles on Everything Ever Written continues the theme. So Many Things to Decide, Nothing I Can Do About It, (Use it) If You Can Use It, All Things Different – Idlewild are at that point where you consider what went wrong in life so far and how much time you have left to get it right.  How many of us could empathise with Roddy when he sings that he “used up my ambitions, I soaked them in wine”? Or that he “made important decisions too late in life”?

But Woomble has always written introspective and emotional lyrics. The change with Everything Ever Written is that Idelwild now make music which sounds like a band with twenty years experience rather than either jumpstarts with something to prove, or that they are trying too hard to be popular. The album is littered with clever folky/country string arrangements and songs that feel crafted and broody rather than immediate with a slower pace than some fans will be used to.

Woomble recently described 2015 Idlewild as a “new version of an old band”. He’s right. Everything Ever Written sounds different, but with the same DNA that fans of their past efforts will recognise.  More importantly, it is broody and a little melancholic but in a wise friend kind of way, rather than overrun with moaning and pessimism.

Sometimes people grow old and bitter, sometimes they do something stupid to try and reaffirm their youth. Sometimes they just stop, have a think and look to the future. Idlewild have taken some time, done the latter and the result is their most accomplished album to date.