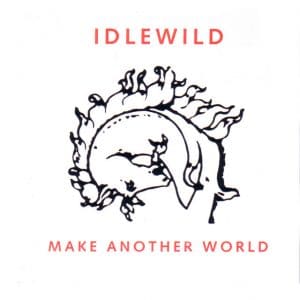 Back in the mists of time, where primitive man roamed the tundra and Jade Goody could still successfully apply for an Indian visa, the coming of a new album by Scots rockers Idlewild was heralded with great fanfare.

Unlike late ’90s Britrock contemporaries like Three Colours Red, My Vitriol and King Adora, Idlewild pulled off the trick of marrying ear-bleeding volume with actual proper tunes, all successfully cribbed from lead singer Roddy Woomble‘s extensive R.E.M. collection. From storming 1998 debut Hope Is Important, full of moshpit friendly bombasts like Captain and Film For the Future, through successive albums 100 Broken Windows and The Remote Part, Idlewild looked for a while one of the most likely British bands to take the step up to world domination.

However, just as they stooped to conquer, 2005’s lightweight LA-produced Warnings/Promises choked, receiving terrible reviews and public apathy, too fey for hardened Idlewild nuts, and without the tunes to carry them into the charts. It seemed to be the sound of a band running out of steam and ideas.

So this new album, the band’s fifth, has the distinct air of a band returning to their roots to start anew. Not for them the radio-friendly slowies of the last few records, replaced with a raucous return to a rockier past. Every track here bar one sees Idlewild’s guitars turned to the proverbial 11, and although it’s a far from perfect return to form, the results are still exhilarating in parts.

The same thrill that rose in the back of the throat the first time you heard beefy 100 Broken Windows single A Little Discourage is still here, hiding at the peripheries of songs – just listen to the moment the chorus kicks into A Ghost In The Arcade for a reminder of past glories. And while lead single No Emotion does sometimes bear a remarkable resemblance to a Rasmus track, with dreadful whooped backing yelps ruining an otherwise very spiky song, this is Idlewild at their best, poetic, strident and really bloody loud. Similarly, opener In Competition For The Worst Time is a short, sharp burst of pure pop that would put Fall Out Boy to shame, and sure to be single If It Takes You Home is silly, shouty and just as tuneful as anything in the band’s back catalogue.

However, there are no new ideas here. This is resolutely, steadfastly a revisionist piece, offering none of the same thrills that much of their earlier work did. Wooble’s oft maligned lyrics are still endearingly terrible after all these years, sweetly nonsensical and befitting of an undergrad poetry student rather than a seasoned rock veteran, lifting giant chunks of lyrical metaphor about ‘winter’ and ‘mountains’ from albums long-gone. The album dips spectacularly in the final third, and it’s as much of a relief to finish it as it was to start it with five or six excellent songs.

For Idlewild fans, especially of the older school, there is more than enough here to warrant a pilgrimage to your local record shop. For the casual observer in need of a bit of ear blistering volume, there are worthier bands that have moved on in much greater steps since 1998.