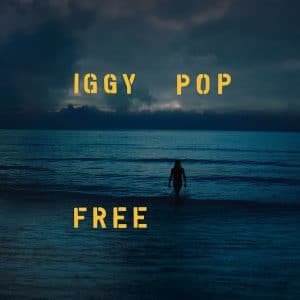 It is amazing that considering Iggy Pop has now reached the ripe old age of 72 he manages to remain unpredictable in terms of both expectation and product. Around the time of his 2016 release Post Pop Depression there were huge questions over his future. He had just seen the significant passing of David Bowie, someone who he had worked with, been produced by and written songs for. This then led many to question if Post Pop Depression would be the end of the line for Iggy Pop and whether he would just stick to being a BBC 6 Music DJ.

As the last track of that album, Paraguay fades out Iggy is heard screaming “cause I’m sick and it’s your fault and I’m gonna heal myself now” it felt that the end had perhaps come to his recorded career. Fast forward to 2019 and with what seems like comparatively little warning we arrive with his new release Free. Free is a complete contrast to what has come before. Long gone are the chugging guitars of Josh Homme from Queens Of The Stone Age and drums of Matt Helders of The Arctic Monkeys that rattle through the last album. They seem to have been replaced with music that has a genuine respect for space, however this is not completely consistent and as a result he ends up with an album that at times sounds slightly muddled.

The album opens with the title track which is a quiet, largely vocal free track. The only time we hear his voice is when he mutters the words “I wanna be free” at the beginning and end of the song. This is swiftly followed by Loves Missing which sounds like a more traditional Iggy song with a slow build, constant guitar riff and ending with almost a vocal crescendo. From here it jumps back to the ambience of the opening track with Sonali which has a very quiet rolling guitar riff and some subtle jazz drum fills that really support the song brilliantly. This jump from one style on songs such as James Bond and Dirty Sanchez (both classic Iggy) to newly formed jazz Iggy happens all the way through. When it works well the album is truly captivating.

The music is largely hypnotic and the moments of sparse instrumentation allow deeper appreciation. It almost evokes a similar feeling to Talk Talk’s Laughing Stock, Iggy Pop’s voice shining through in a similar way to that of Mark Hollis. Here, he is singing with a different sort of emotion. It is slower, richer and more reflective. His voice sounding stronger than ever.

Another point of reference is Bowie’s Blackstar, an album that plays with the essence of a familiar voice over a different sound. Free is not as lyrically emotionally resonating as Blackstar but it evokes similar feelings. The reason that it doesn’t fully pack the same punch is that there is a sense that he cannot fully commit. It is a solid album, but just leaves you wondering slightly what could have been.