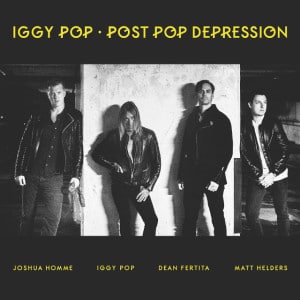 It’s quite remarkable to think that almost forty years have passed since Iggy Pop released his first two solo albums, 1977’s The Idiot and Lust For Life. Following the first breakup of influential proto-punks The Stooges, Iggy went in search of creative freedom and found it in his collaborations with David Bowie. Both LPs subsequently went on to receive widespread critical acclaim, with Lust For Life spawning hits in its iconic title track and The Passenger.

Those two songs have spanned generations – with Lust For Life gaining a new audience after its use in Danny Boyle’s 1996 classic Trainspotting – but Iggy has rarely reached similar heights since. There have been occasional moments where he has shined again, like on 1990’s gold-certified Brick by Brick, yet for an artist whom many would consider to be punk royalty, his back catalogue could best be described as patchy.

His image has also taken a knock in recent years, especially after he starred in the comically bad adverts for the UK insurance company Swiftcover, which were accused of being misleading. However, four years on from his last solo outing Après – which featured mostly French covers and suffered the humiliation of being rejected by Virgin EMI – Iggy Pop is back, at the age of 68, with his 17th album.

Recorded in secrecy with Queens Of The Stone Age frontman Josh Homme at Rancho De La Luna in Joshua Tree, California, Post Pop Depression finds Iggy in completely new territory. “This was to go where neither of us had gone before,” said Homme, when talking about his initial discussions with Iggy, and it is clear from the opening refrain of Break Into Your Heart that the pair have had a positive impact on each other.

“I’m gonna break into your heart/I’m going to crawl under your skin,” Iggy sings hauntingly over a classic devilish guitar riff from Homme, as the song builds towards its surprisingly understated conclusion. It has all the hallmarks of a QOTSA song – with a passing resemblance to the sound that dominated Like Clockwork… – but the veteran rocker’s gritty, world-weary vocals give the lyrics added poignancy and resonance.

In fact, the melancholy wrapped around the opener runs throughout the record, with Iggy pondering his own mortality on the unsettling American Valhalla. “I’m hoping for American Valhalla/but if I have outlived my use/please drink my juice,” he sings, with Homme adding his equally eerie backing vocals over the stuttering beat – provided by Arctic Monkeys’ drummer Matt Helders, also enlisted by Iggy.

Lyrically, Iggy is on point, something he recognises on the sultry Gardenia, where he hails himself as “America’s greatest living poet”. While that is a bit of an exaggeration, there is certainly plenty to admire on Post Pop Depression. Sunday is another highlight, combining an infectious, busy guitar hook with a rumbling beat as Iggy effortlessly struts his stuff over the top (“This job is a masquerade of recreation/Like a wreck, I’m sinking fast”).

Post Pop Depression is not without its flaws – Vulture is an odd misstep that halts the record’s gathering momentum – but the overall execution makes the lesser moments easier to forgive. Germany Days is an engrossing, slow-burner of a track that sees Iggy and Homme join forces to marvellous effect once again, while six-minute closer Paraguay signs the album off in style in one last burst of punk defiance.

There have been strong suggestions – mainly from the man himself – that Post Pop Depression could be Iggy Pop’s final solo outing and in many ways it would be an appropriate way to go out. Thanks in no small part to the significant contribution of Homme, the shirtless rocker has created his best work since his early Bowie collaborations. It seems only right that Iggy should end his long career on such a high.