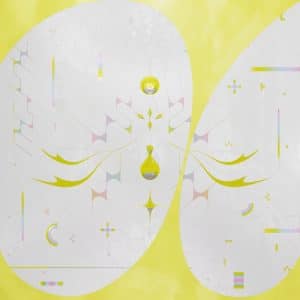 A rustle, a burst of feedback, a couple of clicks, and Seamus Rawles Malliagh aka Iglooghost’s second album begins. Lei Line Eon has much of the same percussive energy as 2017’s Neo Wax Bloom while incorporating more live instrumentation such as piano and violin to the mix, and the results are sonically dynamic and emotionally gripping.

The immediate comparison one draws is to SOPHIE as the beats of Pure Grey Circle squelch, squeak and clang, but the addition of choral harmonies, cut-up lyrics and what sound like bagpipes (?!) add a whole new dimension to the sound.

The track transitions to a more upbeat state, complete with syncopated marimba and an uninterrupted rap verse, before returning to its previous trap-style arrangement for an ornate, violin-led conclusion.

The album can be abrasive, especially on tracks like Ui Birth where Skrillex-esque bass tones come into play, but it never loses sight of a gentle core. Take penultimate track Soil Bolt, which segues from a static-infused bass tone to a brief spot of orchestral minimalism and then gradually reintroduces the digital effects, giving both elements a chance to set the tone.

Zones U Can’t See is a highlight of the record, an ambitious episodic piece that balances cinematic bombast with skittering rhythms and a child shouting to truly dizzying effect, while a group of children serenade us in the dystopian baroque setting of Amu (Disk•Mod), the metallic twang of the harpsichord mutating and extending into an acidic soundbed. If it sounds a little chaotic that’s because it is, but the incongruous aesthetic of the record is endlessly fascinating.

Iglooghost has succeeded in an enviable task: he has managed to create a signature sound while innovating and progressively adding to that sound, and Lei Line Eon is a fine showcase for this unique artistic vision.