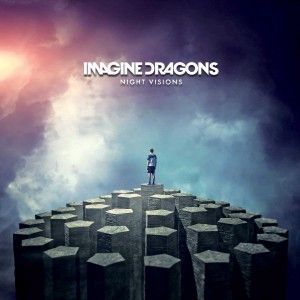 Las Vegas is a city built on relentless optimism and big gestures. Thousands have found out the hard way that whilst the original sin city is one hell of a good time, its bright lights, shotgun wedding chapels and garish facades don’t survive on good luck or judgement.

The same applies to Vegas and its music. Rather than producing their own stars, the city has more often that not imported the finished product for a quick win, be it Elvis Presley, the Ratpack, Celine Dion or Prince – for decades, the strip has dealt in superstars rather than the next big thing.

It is no surprise then, that Las Vegas’ biggest exports, The Killers, Panic! At The Disco and NeYo have found success by being immediate, commercial and relentlessly driven. It’s not easy when you have to compete for venues with magicians, trapeze artists and Cher.

All this goes some way to explain Imagine Dragons’ sound. In an attempt to create mass appeal, Night Visions is extremely polished, consistently safe, radio friendly and generic. Produced by Alex Da Kid (Eminem, Nicky Minaj, Rhianna) it is unashamedly mainstream and like a fixed odds fruit machine, it gives you a brief flurry of excitement but ultimately leaves you short.

If you get the feeling you have heard some of Night Visions before it’s probably because you have. Part of the relentless marketing of Imagine Dragons has been some canny product placement, opening track Radioactive featuring on the trailer for video game Assassins Creed III and On Top Of The World providing the soundtrack to two console football games, Barack Obama’s inauguration ceremony and new animated film The Croods.

Radioactive has far less potency than its title suggests. It sounds a bit nu-metal and has a catchy rock-pop chorus, but also features cringe worthy lyrics about the ‘new age’. On Top of The World is better, the jaunty little keyboard line is more interesting that the pop-metal that runs through lots of Night Visions and the handclap percussion that builds up to an optimistic chorus about, well, feeling on top of the world is fun.

So is Underdog – a pretty simple pop song with an upbeat tone, it won’t ever win an Ivor Novello, but it’s almost Afrobeat backdrop is a welcome distraction from much of the banality on the album.

Single It’s Time went platinum in 2012, most probably because of its rousing chorus about ‘never changing who I am’. It sounds like The Killers if they had a mandolin more often than a keyboard and even has a similar key change sing-along ending. Similarly, Demons is a soul searching number about looking for where ‘my demons hide’ which is far too serious for its own good.

It’s a constant theme on Night Visions. Many of the songs here are angst ridden without any real emotion – Bleeding Out, Hear Me, Nothing Left to Say are all so bland that as they play out you just wish Imagine Dragons would stick to being a fun band from a fun town instead of trying to tap into the Linkin Park/My Chemical Romance style, stadium rock emotion.

It isn’t easy to break out of the stiff competition of the Las Vegas bubble and Imagine Dragons clearly understand what has worked for other Nevadans who have gone on to even brighter things than the sunset strip, by sounding big, bold and commercial.

Unfortunately Night Visions is so safe and middle of the road that it leaves you with the same hollow feeling that Las Vegas can, without the dizzying high and sensual assault that got you there in the first place.