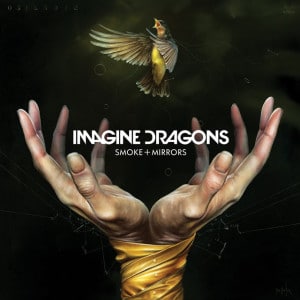 Imagine Dragons hit serious pay dirt in 2012 with their multi-million-selling debut Night Visions. That album was hard to pigeonhole: not because the Las Vegan band has alighted upon a hitherto-undiscovered musical genre, but rather because their sound is, frankly, all over the place: a ragbag assortment of arena rock, hip-hop, blues and folk. If reaching for a concise label, Imagine Dragons could best be described as “Coldplay on steroids”.

And now here is the follow-up, Smoke + Mirrors, co-produced by the band and English producer Alex da Kid (whose previous clients include Eminem and Nicki Minaj). Like Night Visions, it sounds like the product of a severe case of musical attention deficit disorder, as genres are spliced and mashed together like a hurriedly-assembled playlist.

Opening track and first single Shots deploys a guitar part reminiscent of Coldplay circa Viva La Vida alongside pulsing synths (and a decent-enough melody). I’m So Sorry’s quite obvious attempts to sound like The Black Keys are hamstrung by a deliriously incongruous guitar solo that sounds like Hocus Pocus by Focus; I Bet My Life is – in all seriousness – death metal gospel; Trouble resembles an angrier Mumford And Sons and, right at the album’s death, The Fall pulls out a closing section that recalls one of The National’s more propulsive moments.

All of which makes Smoke + Mirrors sound like a cynical effort to appeal to all of the people, all of the time. And yet, much of this album is so odd-sounding that it’s hard to imagine its creators being especially commercially-minded. Take, for instance, Gold’s weird hiccup sound effect that announces its lurching, unpleasant chorus. Or the bizarre noises on the title track’s bridge which, on first play, will convince the listener that something’s up with their playback device. Or that weird, high-pitched sound that works its way through Summer. In among this melange of genres and sounds, perhaps the most surprising moment is It Comes Back To You, which succeeds in actually being quite pleasant.

To be blunt, much of Smoke + Mirrors is horrible to listen to. (One imagines a Soundcloud-style imaging of the album would resemble a very long, very loud rectangle.) And yet, one can’t help but admire the band’s ambition and, on occasions, their apparent lunacy. Smoke + Mirrors might be a lot of things, but one thing it’s not is boring.