Interpol – Our Love To Admire 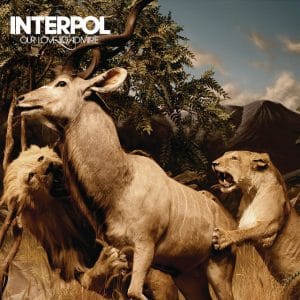 The most surprising thing about Our Love To Admire, once you’re over the initial shocks of a) that wilfully non-Interpol-esque cover art and b) Carlos D’s new varmint-chewing facial hair, is the fact that for the first time the band have cracked open the shades long enough to allow a few rays of light to penetrate the ever-gloomy world which they inhabit.

However, for each glimpse of a happier place there’s still a shitload of foreboding waiting to bundle the good vibes up in a carpet and fling them off a bridge; it’s hardly an album collecting glow sticks and boarding the bus bound for party-central. But then again, Interpol without the darkness would be like Editors with an original idea or The Fratellis without a Leo Sayer lookalike upfront: unequivocally wrong.

It starts spectacularly. Pioneer To The Falls is a magnificently ominous thing, all skeletal guitar riffs writhing like landed eels, a rhythm section laying weighty footprints down in the back and Banks’ spectral vocal floating wraith-like across the top. As a raspberry blown at those who speculated on the negative effects the move to major label backing may have produced, it’s loud, long and pretty darn-tootin’ decisive.

It’s a archetypal Interpol song, albeit deeper, richer and more detailed than anything they’ve managed before. And that’s a common thread. Something like Pace Is The Trick would have been good on Antics, but here it’s extraordinary. Utterly sure-footed, utterly beguiling and hypnotically meticulous in the manner it slowly unfolds each section.

Lead single The Heinrich Maneuver crackles with the freed energy only known to those who have extracted themselves from a crappy relationship. Mammoth is mean, spiteful and delivered with mocking indifference by Banks. But for both, and indeed elsewhere, it’s the way in which the elements of the track click into place with a Swiss watchmaker’s precision and artistry that really hits home.

The tempo drops towards the end. They’ve always had a knack of closing things in suitably downbeat fashion and it’s no different here. While Wrecking Ball swings a sad arc of despair with all the slow-building momentum of it’s titular entity it’s Lighthouse which really shows how far Interpol have come.

Washes of Daniel Kessler’s shimmering guitars lap over solidly grandiose brass surfaces and Banks sings a torch song that peels back the taciturn veneer that normally cloaks his voice in icy detachment. Of course, it’s cool as fuck, but there’s a surprising amount of warmth in it too.

Pah. We leave Interpol alone for five minutes and they pull this trick on us. This isn’t the same band we last saw in 2004. It’s a louder, harder, bigger, bolder, smarter, happier, more confident, more innovative, better band then the one left behind. Screw the major label backing, screw the rumours of inter-band tension, Interpol are operating in another galaxy to the majority of those who claim to be their peers.