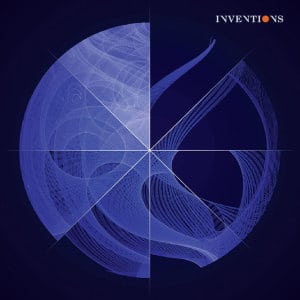 Inventions is the name given to the musical project of Matthew Cooper of Eluvium and Mark T Smith of Explosions In The Sky. In various ways its roots can be traced back to 2013 when the pair collaborated on Envenom Mettle, a track on the last Eluvium album Nightmare Ending. It could also be argued that Cooper’s decision in this year to revert back to a purely instrumental sound after the (less successful) experimentation with vocals on 2010’s Similes helped create the conditions for this album under the Inventions name. On the surface Inventions is much closer to the ambient soundworlds of Eluvium than the guitar-driven post-rock of EITS (although deeper immersion in the album reveals aspects found in the work of the latter also).

2013 also feels significant in terms of being the year where Explosions In The Sky made slight side-steps from their usual sound by releasing two film soundtracks (for David Gordon Green’s Prince Avalanche and Peter Berg’s Lone Survivor). The former in particular demonstrated a softer, stylistically progressed sound and it’s hard not to think that some of this found its way into Smith’s contribution to Inventions.

The key point which receives immediate validation here is the fact that they are both leaders in their respective fields in terms of giving their instrumental music human, narrative qualities. The perfectly formed ambient exhalations of Echo Tropism open the album, Smith’s guitar finding a comfortable niche alongside Cooper’s enveloping synth textures. It’s far more prominent on Flood Poems, chiming delicately as the track establishes the first overt emotional connection of the album. The appearance of a vocal fragment at the end of the track briefly introduces a subtle, almost new-age dimension which works well in further elevating the already-high sense of poignancy.

Entity and Luminous Insects follow and together form the point in the album where the sheer beauty of the album properly manifests itself. The former begins like a gentle underwater ballet, the sounds arriving as if having just travelled deep from the ocean bed to convey their musical story. They are punctuated by electronic dispersals of ambient sound, which contribute to the wall-of-sound density with which the track ends. Luminous Insects follows, floating in on washes of synths, implying a panoramic vastness yet still sounding personal and intimate in nature – something Eluvium records have succeeded in doing for a long time. Indeed, at times the music here is a worthy match to that of Copia, Eluvium’s high point album from 2007 (incidentally also the year when Cooper supported EITS on tour). The track also demonstrates how they manage to successfully interpolate voices into the swirling sounds (possibility helping explain how the instrumental music can feel so enriched with human sensibility).

The grand, patient, ambient constructions of Peaceable Child continue in a similar vein but the unrelenting rhythms of Sun Locations / Sun Coda mark a distinct change. The music up to now may have been defined by a gradually-shifting, tranquil radiance but for three minutes it is replaced by a striking hyper-alertness bordering on paranoia. Recipient reinstates the sense of repose and calm (something Cooper has seemingly achieved on previous Eluvium albums through song titles alone – see Indoor Swimming At The Space Station as a case in point). Closing track Psychic Automation sees the sky open up to drench all that has passed before it in glorious rainfall. It’s likely that their next releases will be under their established names but with Inventions Cooper and Smith have created a piece of transportative music that is as majestic as it is elegant. It’ll be savoured for some time.