Iron And Wine – Kiss Each Other Clean 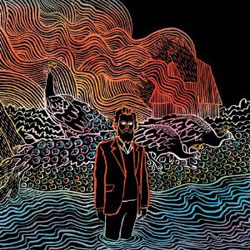 Sam Beam has quietly been building a body of work that makes him one of contemporary music’s strongest and most inventive songwriters. He is a rarity in that he has been given the freedom and time to grow into himself, his recent work veering far from his initial rustic, southern gothic template. Kiss Each Other Clean is his most stylistically and texturally varied creation to date and it is full of surprises.

Beam runs riots with sonic elements he gently introduced on its predecessor The Shepherd’s Dog. Some of it (the saxophones and bubbling synthesisers) will prove too much for ardent admirers of his sparer sound. For those in his audience prepared to explore new territory along with him, it will be something of a treat.

He is a writer unafraid of apparent paradoxes. His music effortlessly combines classic influences with a distinctly modern sheen. The hazy, soft-focus nostalgia of Tree By The River possibly betrays the influence of Fleetwood Mac, most specifically the songs of Christine McVie, whilst Big Burned Hand has a Little Feat-esque light funk groove. Elsewhere, Monkeys Uptown is built on a weird configuration of acoustic and electronic percussion and a delightfully slinky, plucked bass line. Your Fake Name Is Good Enough appears to be several songs packed into one (definitely the boldest move away from Beam’s usual reliance on repetition), moving from a curious Afro-motorik to a half time rock feel.

Beam’s truly extraordinary lyrics are similarly based on compelling, enigmatic juxtapositions. In Walking Far From Home, a list of poetic images that recalls Bob Dylan‘s A Hard Rain’s A Gonna Fall, Beam contrasts the beautiful with the ugly (“I saw flowers on a hillside and a millionaire pissing on the lawn” or “I saw sickness bloom in fruit trees”) and uses his trademark unusual metaphors (“My prayers grew like weeds along the road”). Literate imagery typically pervades the entire album, particularly in the expansive centrepiece Rabbit Can Run, where “judgement is just like a cup that we share”. It’s clear that Beam’s songs are stories in the folk tradition, but they have an elusive, mysterious quality that will keep listeners guessing as to their real meaning. Beam’s intention is perhaps more to create a feeling – reflection or empathy perhaps – and to build his vocabulary around that. The songs here seemingly aim to get beyond good and evil – to a world where kind people do bad things and where events cannot be neatly categorised or understood.

Whilst the music is wide ranging and exploratory, some general impressions do emerge. Beam has been indulging a fondness for elaborate vocal arrangements for some time now (think of the soft, cooing voices which are so crucial to the impact of The Trapeze Swinger, his greatest song so far). Here, this is taken to a new level. Layered vocals appear everywhere, sometimes in panoramic fashion, at others blending wonderfully into sumptuous backgrounds. Perhaps as a result of this, Beam’s own voice is less subdued. His voice is never likely to be imposing or even dominant, but he appears to have achieved a new clarity of delivery without sacrificing his preference for understatement. However far Beam travels from the sound that initially defined him, he never seems to be too far from some anchoring elements. Even the squelchy funk of Me And Lazarus, with its smoky saxophone lines, is immediately recognisable as Beam’s work through its melodic and poetic language. That Beam has such a unique and identifiable artistic voice is evidence of his substantial talent.

Kiss Each Other Clean may not have a song as outstanding as The Trapeze Swinger or Flightless Bird, American Mouth but this is not a major problem. Some of the experiments here may work better than others in the long term, but it is far better that Beam is an artist prepared to take risks. His best work may be yet to come, while his writing remains vivid and evocative. He belongs in a category as much with Cormac McCarthy as with Will Oldham.