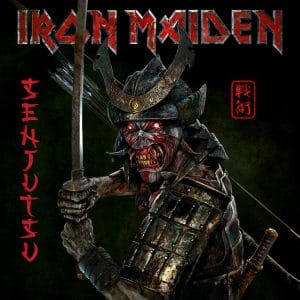 Seventeen albums in and the Iron Maiden juggernaut shows no signs of slowing down. Even though the members of the band are carrying a bit more heft and new hips (Bruce Dickinson), the music they’re creating is still up there with some of the best in their long career. This six piece line up is now the most consistent in the band’s history, and it shows throughout Senjutsu. Here is a band comfortable with their sound and with how they work together.

The problem when reviewing Iron Maiden is that there’s only really their back catalogue to compare to, for in terms of their place within the heavy metal pantheon, Iron Maiden have no real contemporaries. There’s metal, and then there’s Maiden. However, despite the band having an instantly recognisable sound, that doesn’t mean that they’re content to churn out album after album of identikit Iron Maiden records. Instead they are continually attempting to move forward and develop, even if it’s in baby steps. They’re never going to come back with an ambient electronica album, but even subtle changes in the band’s musical direction seem significant and huge in Maiden’s Brave New World.

Recorded back in 2019, the band must have some kind of premonition, because in terms of tone and production, this is one of the darker, heavier and contemplative albums in the band’s long history. Doom, blood and war hang over these songs like a blackened cloud. The thunderous sound of the drum that introduces the album is an indicator of the darker sonic territories the band is seeking to explore. It calls to mind the opening seconds of Sepultura‘s Arise, but Maiden haven’t quite got around to thrashing things up just yet. Musically, underneath the familiar galloping bass, relentless solo trade offs and distorted guitars there’s an unmistakable folk flavour to many of the compositions on Senjutsu, and folk is of course where all the darkest tales hide.

It’s fair to say that Maiden has long since moved on from the days of three or four minute songs where the riffs were instantly recognisable and they packed everything in with the flash of a blade. They’re now teetering on the precipice between metal and prog rock (Jethro Maiden anyone?), as they stretch things out until they’ve rung every last opportunity for a solo or a spot of introspection from their songs. There are times when this can sound like relentless and sometimes pointless fretwankery, but when you’ve got three guitarists of the calibre of Dave Murray, Janick Gers and Adrian Smith, that doesn’t tend to be much of a problem.

The two “short” tracks, Stratego and Days Of Future Past are reminders that the band packs a punch when they embrace brevity. Stratego possesses that relentless rumbling bass and Dickinson howl that populated the likes of Can I Play With Madness? Days Of Future meanwhile finds Smith stepping up and applying his ability to bend Maiden’s sense of mood and melody (whisper it) popwards. The Smith compositions on the album all possess his deft touch and way of injecting emotion into the Maiden sound. The Churchill inspired epic Darkest Hour is drenched in imagery of blood on beaches, depression and loss, and yet still manages to soar wonderfully, aided, it must be said, by an in form Dickinson. The Writing On The Wall finds a midpoint between dusty American desert roads and a Celtic jig, whilst also landing a chorus that stands shoulder to shoulder with some of Maiden’s best.

There are a few nice touches that refer back to older Maiden compositions if you’re tuned into them. The delayed vocals in the first verse of Lost In A Lost World echo those of Number Of The Beast’s 22 Acacia Avenue; there are elements of The Time Machine that nod in the vague direction of Hallowed By Thy Name; and The Parchment and Death Of The Celts (in amongst all the jigging riffing) both feature blink and you’ll miss it allusions to the closing track from 1983’s Piece Of Mind, To Tame A Land. If there’s a moment in Maiden’s past that foreshadows Senjutsu, it’s To Tame A Land’s prog-tinted voyage into the world of Frank Herbert’s Dune landscape. Its influence or at least its ambition (fully realised with the epic Rime Of The Ancient Mariner from 1984’s Powerslave) seems to hang over the final three Steve Harris compositions of the album, all of which clock in at over 10 minutes.

It’s fair to say that Senjutsu is definitely an album of two halves. The first half sates the need for punchier anthems, whilst the second allows the band to explore its more excessive, prog tendencies. As such it feels like an album that pleases both fans and the band in equal measure. Not that the closing trio of songs are a chore to work through. They could do with a little trimming perhaps, and once the similarity between The Parchment’s intro and The Proclaimers‘ 500 Miles is noticed it is impossible to unhear, but these are small concerns. Once the band gets stuck into trading solos and thundering through the chord changes, the darkness of these tales lifts, there’s clearly a lot of joy at the heart of these songs. The closing track Hell On Earth doesn’t have an ounce of fat on it, despite weighing in at 11 plus minutes. Dickinson’s vocals twist, soar and roar just as they have done all these years, whilst the band flips between quiet contemplation, those trademark Maiden riffs, and perfectly judged solos.

Senjutsu is Iron Maiden’s strongest offering in some time, looking forward whilst occasionally peering back over its shoulder. In tone it’s the band’s darkest album, but the sheer coherence and confidence of the playing, writing and production makes it feel filled with light and positivity. There’s conflict all over the album, but this is the sound of a band firing on all cylinders. It’s great to have Iron Maiden back in this kind of form.