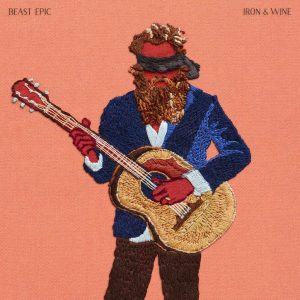 Recent years have seen Sam Beam focus more on collaborating with other musicians rather than releasing music under the Iron And Wine name. However, after recording two well-received albums with Ben Bridwell and Jesca Hoop he now returns with Beast Epic, the sixth Iron And Wine release.

Beam has spoken about how one of the key themes to the album was the passing of time and how humans process and manage experiences. There are hints of this within the lyrics of the album, but it is arguably in the music itself where this is most evident.

Beam has been quite open in talking about how it is in some ways a return to his earlier sound. In some ways this is true, especially in terms of the simpler structures at play and the prominent role occupied by his acoustic guitar yet the production is still clean and very ‘modern’ Iron & Wine (the dusty, crackly sounds that defined early albums are still long gone).

The greater clarity and simplicity is noticeable from the start, Claim Your Ghost featuring a directness and repeated refrain which suggests the musical equivalent of a warm comforting blanket on a cool autumn evening. The contented, sedate feel is extended into Thomas County Law and Bitter Truth, the latter defined by country echoes, relaxed pace and harmonious touches.

A heartfelt sweetness runs through Call It Dreaming, with Beam singing about how “our music is warmer than blood”. It shows he’s good at making music that encourages pause and reflection in an increasingly fast-paced and overwhelming world. It confirms the view that this isn’t an album for those looking for quick wins or instant gratifications but rather for those happy to engage in deeper consideration or methodical unpicking. Lyrically he can be esoteric also – “tenderness to you is only talk about a bruise or walking into water after dawn” he sings cryptically. He is still a skilled lyricist and conveyor of stories with a voice that is in fine condition.

Beyond the passing of time other themes revolve around nature, animals and the environment. The religious allegories found on albums like The Shepherd’s Dog are toned down (the closest we get here is on The Truest Stars We Know where Beam sings of “Jesus and his trophy wives praying for the suicides and the orphans”)

About A Bruise has shades of M Ward, with a slightly more dynamic feel, while Last Night is wistful, but with small musical twists and exposed strings. Spare and spacious, it shows Beam is still able to capture moments of intimacy as he sings sensitively of how “it’s our last night to lie in these arms”. Summer Clouds and Our Light Miles meanwhile are threadbare and sincere and both seem to reside half way between country and alt-country.

Beast Epic is a worthy addition to the Iron And Wine catalogue and an example of an album that improves the more and deeper you listen to it. It may be unlikely to win Beam huge number of new followers, but long term fans will find much to enjoy within its self-contained, unobtrusive sounds.