Iron and Wine & Ben Bridwell – Sing Into My Mouth 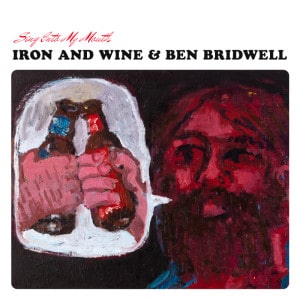 A collaboration between Iron And Wine and Band Of Horses, two of the most consistently excellent Americana acts of the past decade, hardly qualifies as an unlikely alliance, especially as Sam Beam and Horses front man Ben Bridwell are fellow South Carolinans who have known each other since the beginning of their careers. Indeed, it was Bridwell’s brother who passed a copy of Beam’s early demos to a magazine editor, who included them on one of his publication’s compilation CDs and thus launched the Iron And Wine story.

What’s perhaps more surprising is that when the two men finally got round to recording together, rather than combining their shared song writing strengths they’ve opted instead to assemble a series of sometimes unlikely covers they claim have influenced their music, ranging from Pete Seeger to Talking Heads, Spiritualized and even Sade. Based on these ingredients, the end results could have been an acquired taste, but what we get is thankfully very palatable indeed.

This is principally because though their choice of material is sometimes a surprise, the style of the recordings absolutely isn’t. Similar to Iron And Wine and Band Of Horses records, the prevailing sounds here are steel guitar, rolling piano and softly brushed drums, topped off with some deliciously harmonic vocals and the occasional brass and organ adornments. The overall mood is a little closer to Iron And Wine’s gentle, lo-fi early work than Bridwell’s band’s more epic country-rock, but Beam and Bridwell are clearly such kindred spirits the tracks flow effortlessly, without the slightest hint of clashing ideas.

Sing Into My Mouth (it must be said, not the best title) opens strongly with the duo’s interpretation of Talking Heads’ This Must Be The Place, reinventing the original’s jerky funk-pop into a quintessentially Southern, lilting front porch strum. Another early highlight, but one that’s much more faithful to the song’s roots, is their take on John Cale’s You Know More Than I Know, although Bridwell’s soaring tenor enhances the beauty of a chorus rendered rather more earthbound by the ex-Velvet Underground leviathan’s tortured rasp.

As the album unfolds, further gems are revealed. The subtle country influences of Spiritualised are explored and expanded in the bucolic The Straight And The Narrow, while the economical, barely a minute long loveliness of Ab’s Song, originally by Southern rock pioneers The Marshall Tucker Band, recalls an Iron And Wine of a long-lost Creek Drank The Cradle vintage. Closing track Coyote, My Little Brother is a fitting climax to the album’s ideology; somehow dragging Pete Seeger kicking and screaming into the psychedelic space rock of My Morning Jacket at their most mesmerising.

There are a couple of missteps along the way – an attempt to transform the anodyne jazz-lite of Sade’s Bulletproof Soul into an atmospheric, slow-burning ballad falls a little flat and even the combined talents of Beam and Bridwell can’t pull off the feat of turning the soporific dirge of El Perro Del Mar’s God Knows into a decent tune. But these are minor faults indeed in what’s a hugely enjoyable, relaxing warm bath of a record that easily surpasses the recent work of both its two main protagonists.