Various Artists – Is It Rolling Bob? A Reggae Tribute To Bob Dylan 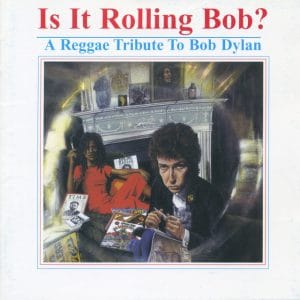 On the face of it, it’s a great idea. Duluth’s finest, one Bob Dylan, wrote (and writes) a number of tunes that are considered to be quite a big deal in these parts. Back in the ’60s, he caused quite a stir with his folk polemics, attacking something known rather nebulously as the old order.

When he discovered amplification, some would say he found his true niche composing electrified, funny, vicious barbs about love, lust, ego, selfishness, bitterness and betrayal. Lots of people loved it, and sent virtually all of his albums straight to the top of the charts, particularly as Dylan was the first to treat albums with the care all others reserved for a three-minute single.

Jamaica is home to arguably modern music’s richest lodestone. Since the island fused calypso and American r ‘n’ b into reggae and its various offshoots, cover versions have been a proud part of its heritage, often transforming original material and revealing something far more wonderful and energised than was apparent in the initial composition.

A Jamaican producer, one Doctor Dread, decides to assemble a crack team of local musicians, including demi-god rhythm section Sly Dunbar and Robbie Shakespeare. By dint of some specious link between Jamaica’s most famous son, Bob Marley, and America’s Greatest Living Songwriter, Doctor Dread instructs all to pay tribute to Mr Marley’s spiritual brother for one CD-set. Hence, Is It Rolling, Bob?

So what’s wrong with that, smart arse, I hear you all ask? Well, many of the uneducated still hold that The Big Zim sounds more nasal than their 20-year old vacuum cleaner and reckon that he is best heard at one remove through the comfort of an interpretation (on Slow Train Coming, this is actually true). For the most part, though, Dylan originals are definitive.

Yes, there are exceptions. Bert Bern’s hypnotic arrangement on Them‘s recording of It’s All Over Now, Baby Blue and Bryan Ferry‘s camp-pop treatment of A Hard Rain’s A-Gonna Fall bring something new to the Dylan appreciation party.

So does Is It Rolling, Bob fulfil its potential? Sadly, no. Many of the treatments here are disappointingly cloaked in a reggae-lite that would enervate any revival nite. With the possible exception of Lovers, reggae was never a formally literal language. It relies as much on the eternal propulsion of its skank as its own codified vernacular. Here, the winding longform of Dylan is often handled with too much respect.

That’s not to say Is It Rolling, Bob doesn’t have its moments. Gregory Isaacs‘ honeyed voice manages to blow new smoke rings through the labyrinth of Mr Tambourine Man. Sizzla adds a new freneticism, and fresh raps, to Subterranean Homesick Blues. Prime billing, though, goes to Nasio‘s take on the pious Gotta Serve Somebody, giving Dylan’s God-fearful epic a powerful apocalyptic reading. Oddly enough, this is one of two tracks where Sly & Robbie are conspicuous by their absence. A reminder that it was they that was responsible for Red Dragon (remember Compliments On Your Kiss?). They also think Simply Red‘s Mick Hucknall is great.

Take a moment to consider that last sentence. What does illuminate this collection is the inclusion of a Dylan exclusive. I And I dates from Dylan’s Infidels album, and this is one of the few Dylan remixes ever sanctioned. Doctor Dread gives ’nuff dub echo to Sly’s rim shots and to Mark Knopfler‘s dry twang (yes, that Mark Knopfler). Dylan sounds re-invigorated, mean, and vengeful, mixed way out in front, just as we like it.

Is It Rolling, Bob? makes bullish claims, but most of this collection just ain’t tuff enough. Despite the clever-clever cover art, you shouldn’t need to bring it all back home.