Islet – Released By The Movement 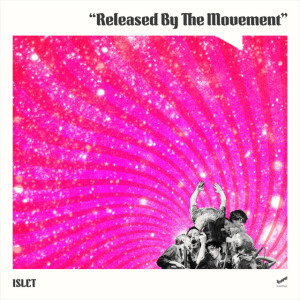 Live, Cardiff’s Islet are one of the best bands around. Their blend of krautrock, psychedelic funk and garage rock, wrapped up in a wildly unpredictable package, usually results in something truly absorbing to watch. On their day, they’re up there with British Sea Power when it comes to performing.

Which is why Islet’s follow up from last year’s debut Illuminated People is quite frustrating. Their debut captured their live presence well, particularly through tracks such as This Fortune and Entwined Pines. Yet Released By The Movement has taken things the other way.

Five minute long opener Triangulation Station initially sounds like something from Blur‘s Think Tank, principally 2003 single Out Of Time: the same low rumbling bass and hollow snare, coupled with a sort of loud cooing in the background while Emma Daman’s lo-fi produced vocal hovers above. We then have an unexpected switch in rhythm and sound reminiscent of Faust, with Faust IV particularly coming to mind. This carries on before the last couple of minutes enter full-blown krautrock territory, with pleasingly intricate and high-tempo bass lines propelling the song along.

This seems great – and certainly should be – yet the production lets it down. Rather than sounding energetic and forceful, which is Islet’s forte, we get something muddy sounding that struggles to convey the energy lurking beneath. Islet have enlisted Welshman Sweet Baboo to help with the recording and mixing and while it’s speculation as to whether his influence has led to this change, the contrast between this and their debut is clear and not particularly helpful to the band.

Carlos is better, with the chopping guitar and confident sounding funk-like bass submerging the reverb vocals beneath, almost drowning them in the process. It seems intentional and is, again, very krautrock. Tripping Through The Blue Room Parts 1 and 2 then follow, both of which are relatively sedate – calming, even – and show another dimension to Islet’s sound.

They do have a sort of quiet boldness to them, though, shown particularly Pt. 2, with the spacey sounding guitar effects, vocals and gentle plucked bass letting this become the band’s more trippier version of Faust’s Run, again from Faust IV. There is also the return to the lo-fi muddy sound heard from the outset, yet it’s a bit more suited here.

It isn’t on Citrus Peel, mind. Again, underneath the muddiness is gnarling bass and guitar failing to release itself, in turn producing something rather hindered and confined. They should have let it free. That’s what Islet are good at.

The nearest they come to this is on Mirror Me, perhaps the cleanest and cleverest sounding song on the album. Here, the organ and guitar are allowed to expand, with the unexpected math-rock shifts in time signatures helping create something surprising and, at times, quite unexpected.

It’s a divisive one this, mainly due to its production, and in consequence Released By The Movement is a difficult album to judge. On the one hand, Islet have attempted to progress and provide us with something markedly different from their debut. At times this works quite well. But on the other hand, they might have been better sticking with what they can do well: music that’s blatantly forceful, energetic, erring on the edgy and wildly avant-garde.