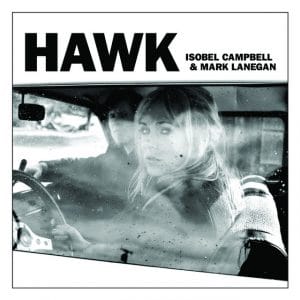 Hawk is album number three for Isobel Campbell and Mark Lanegan, and whilst many may have been surprised by the pair getting together initially, their work together has often provided career highlights for both of them.

Despite her diminutive vocals, it is Campbell that provides the driving force behind the duo. As with Sunday At Devil Dirt, she’s the primary songwriter and producer of the album. Lanegan takes a back seat much of the time, appearing on just eight of the 13 tracks, but his presence is always keenly felt. His grizzled, earthy tones have been a thing of wonder since his days with Screaming Trees, and when coupled with the understated, almost naïve sounding Campbell the effect is magical. Nowhere is this more evident than on Come Undone and Time Of The Season, in both of which they combine with a smouldering sensuality that possesses both tenderness and underlying threat.

Come Undone is an unashamed reworking of James Brown‘s It’s a Man’s Man’s Man’s World, complete with insistent piano and aching string sections. But it’s a more low-key affair in Campbell and Lanegan’s hands; they reflect on lost love, heartbreak and regret with lazy resignation. There’s anguish in their voices, but no insistence towards resolution – just heavy-hearted acceptance. The combination of Lanegan’s world-weary drawl and Campbell’s cute huskiness is electrifying, and as the strings surge skywards, Come Undone becomes the duo’s finest moment by some distance. Time Of The Season’s country swing and Christmastime love theme echoes Everybody’s Talking At Me from Midnight Cowboy musically. The song’s story is exquisitely written – awash with carefully thought out imagery, and delivered in a subdued hush that accentuates the heartbreak further.

Lanegan’s vocals may well be the reason that most people are drawn to Hawk, but there are plenty of other reasons to explore the album fully. The closing gospel of Lately is astonishing, mainly due to the soaring vocal talents of Makeda Francisco and Tisha Freddrick. The instrumental fury of the title track is fantastically grubby – feverish saxophones scream, honk, and batter each other into submission over a straight-up 12-bar backbeat. It’s simplicity incarnate, and utterly brutal.

Campbell’s duets with Willy Mason, No Place To Fall (a Townes Van Zandt song) and Cool Water are also particular high points. Mason’s vocals compliment Campbell’s in a different way than they do Lanegan’s. Where Lanegan appears as a counterpoint – an acquaintance from the wrong side of town – Mason feels like a kindred spirit, and a shoulder to cry on. Cool Water in particular sounds relaxed, with the performers finding a gentle groove and settling into in as if with a relieved sigh as they take a load off.

Campbell is more than capable of shining on her own. Sunrise’s ghostly chime has the ability to chill despite its title, whilst the Neil Young-inspired To Hell And Back Again meanders as she breathlessly coos a deathly monologue over its galloping framework.

However, it’s the way that Lanegan and Campbell work so well together that makes their albums so rewarding. On the celtic oompah of Eyes of Green, they combine sweetly as the violins take over, adding significance to the final line: “I will love you til the day I die.”

Hawk represents the finest moment of the Campbell and Lanegan collaborations thus far. Hopefully this time around Isobel Campbell will attract the praise she so clearly deserves. Lanegan’s voice might well be amazing, but it has tended to overshadow Campbell’s input. This time around, however, Campbell’s proving that she’s a vital part of the partnership.