by Ben Hogwood
published: 5 May 2008 in Album Reviews
Tweet 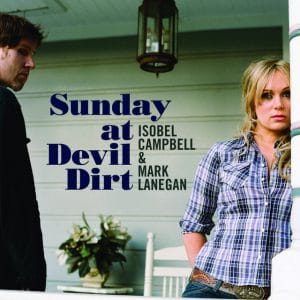 Such was the success of Isobel Campbell‘s first collaborative album with Mark Lanegan, Ballad Of The Broken Seas, that the two have reunited for a sequel. I use the collective term loosely, mind, for these vocals have been recorded at opposite ends of the globe.

As with the first album, the songs were written by Campbell with Lanegan in mind and sent over to the former Screaming Trees vocalist, who taped his parts and mailed them back. All of which makes the chemistry between the two on these new songs even more remarkable, as they frequently sound as if they’re using the same microphone.

With a relative familiarity established – musical, at any rate – Campbell can now write explicitly for Lanegan’s immediately recognisable bass, which scrapes across the floor in The Raven, chilling to the bone while Campbell coos from afar. The strings swoon softly, the music fighting for breath to get out of the blackness.

The two voices may frequently sound emotionally scarred in each other’s company, yet they find solace in the revealing closeness of songs such as Who Built The Road, and the more explicit desire of Come On Over (Turn Me On), which starts with a gait akin to Nina Simone‘s I Put A Spell On You.

It’s a feature of the album that unexpected moments of warmth and optimism can be found and lifted from the darkness. The Flame That Burns finds the two voices apart yet together, completely in the nature of their recording relationship, while the endearing whistling that closes Something To Believe is a world apart from the drawl with which Lanegan began it.

The string arrangements are sensitively employed, and never impose themselves on the music, which helps give Campbell’s feathery voice in particular the room it needs. Meanwhile humourous instrumental touches are occasionally employed, the deliberate wrong notes on the piano that bisect Back Burner and The Flame That Burns adding a sardonic edge.

Where Campbell and Lanegan’s first album of dusty duets was an unexpected treat, this is less of a surprise but builds on that record’s success, exploring the musical chemistry between the two still further. Clearly they sing from the same emotional hymn sheet, and that can only benefit those listening to these occasionally tortured but ultimately uplifting songs.