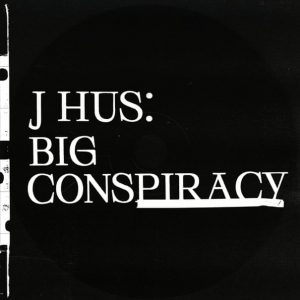 The road from J-Hus’ previous record, 2017’s Common Sense, to this one has been turbulent – he was arrested for knife possession and spent four months in prison – but Big Conspiracy seems largely unfazed by this. The incident pops up on Fight For Your Right (“a hundred racks on my bail, fuck sittin’ in jail / had feds on my tail but they gon’ burn in hell / I got eight months but my niggas doing a L”) but nowhere else, either because the material was recorded earlier or because J-Hus just wanted to leave the episode behind him.

The album’s musical style is very similar to Common Sense, a mixture of mid-tempo G-Funk and afrobeats, although this time there’s a smattering of drill too. Whether it’s the groovy bassline of Helicopter or the intricate clicks, clacks and claps of Repeat, the accompaniment perfectly complements tales of money and hood politics, filled with the violence that has so frequently affected J-Hus’ own life.

The first two tracks both feature the sultry tones of icee tgm, while Nigerian singer Burna Boy appears for the extended gun metaphors of Play Play (“she said her ‘usna needs a bandage / after I come round and gave her the 12 gauge”) over swaying chords and reggae-tinged drums. Koffee dominates Repeat with a bombastic flow, leaving the star of the show on hook duties.

One recurring feature of J-Hus songs is a Danny Brown-esque ability to switch delivery, from earworm hooks delivered in a casual mumble to more animated verses, and the result often sounds like he’s two performers in one. Big Conspiracy showcases both of these sides well, while exploring a darker side of his sound palette and confirming his place in the new generation of post-grime British artists.