J Mascis – Several Shades Of Why 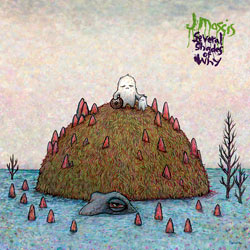 For all the squally guitars, torrents of feedback and tracks called Puke + Cry, there’s always been a softness at the heart of Dinosaur Jr’s music. Despite his Ritchie Blackmore-meets-Neil Young guitar style, Dinosaur Jr’s J Mascis is clearly in thrall to the pleasures of pop music. This was none more evident than on Take A Run At The Sun, Mascis’s unashamedly saccharine contribution to the soundtrack of the 1997 Brill Building movie, Grace Of My Heart.

On Several Shades Of Why – the first solo album of Mascis’s 25-year recording career – that softness is allowed to come to the fore across 10 drumless, predominately acoustic tracks adorned by the occasional smidgen of electric guitar. Mascis isn’t alone: he’s helped out by some friends, most notably Kurt Vile, Kevin Drew of Broken Social Scene and Band Of Horses‘ Ben Bridwell. But it’s Mascis’s voice that dominates throughout, and it’s fair to say that this will be a dealbreaker for many. Those listeners who never ‘got’ his rasping vocals won’t be adequately recompensed by the change in musical approach. Those who can’t get enough of Mascis’s Eeyore-esque demeanour, though, are in for a treat.

On the whole, Mascis’s decision to soothe, rather than harangue, the listener’s ears pays off. There are occasions – such as the briskly-strummed opener Listen To Me and, later, the rather perfunctory Where Are You – when the songs simply sound like unamplified Dinosaur Jr tunes. These are Several Shades Of Why’s least interesting moments. The album’s highlights occur when Mascis properly embraces the acoustic medium, none more so than on the exquisite title track, in which a spindly acoustic guitar figure is supported by the graceful sound of Sophie Trudeau’s violin. It’s one of Mascis’s very best songs, and there are few higher compliments than that.

Elsewhere, Not Enough conjures up a cockle-warming, arms-round-the-shoulders-at-the-campfire atmosphere. Along with the similarly catchy Is It Done and the lovely, flute-enhanced Make It Right, it has a lightness and breeziness that are without precedent in the Mascis catalogue. As suggested by the album’s title, the anxieties and ambiguities of love remain Mascis’s primary lyrical concerns. But, as with most Dinosaur Jr records, the predominant tone is one of bemusement rather than hostility or depression.

Given that it follows a possible career-best Dinosaur Jr album – 2009’s superb Farm – long-term Dino fans will hope that Several Shades Of Why isn’t the start of a permanent solo career. But Mascis followers will find plenty to enjoy here.