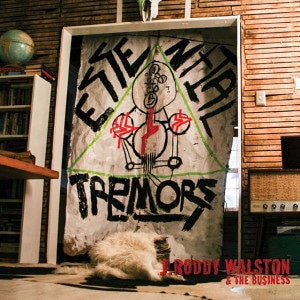 When many of us first heard J Roddy Walston and the Business, it was a few years back with the ragged, honky tonk bar slammer Don’t Break The Needle, a tour de force that somehow successfully channeled Lynyrd Skynyrd, Bachman Turner Overdrive and Jerry Lee Lewis into a whole new concoction, like some unholy earworm the Rolling Stones only wish they had written. The Tennessee Quartet’s self-titled album had charm to spare.

With a new label, J-Rod (can we make this a thing?) and his crew have created a bar album to be played in pool halls right across America. Essential Tremors is, first and foremost, an American album, informed by a time when men slept in leather jackets and women’s lipstick was always dark red, and the jukebox had a “No Disco” sticker on its side.

The album begins with Heavy Bells, a distortion-fueled number that sounds like In the Summertime by a very angry Mungo Jerry. Roddy’s voice shrieks strange; his smoke racked instrument creates new notes, between vocal chords and heavy breath, while yelling “I know that old Catholic tone/ I know that Catholic tone/ the heavy bells/ the heavy bells.” Is this the Southern rebuttal to AC/DC’s own Hells Bells? Is this a reference to a Flannery O’ Connor novel? Walston’s songwriting philosophy is multi-layered, and can be summed up by the man himself:

“It seems like most bands write for either the animal side of people or for the side that’s more in tune with the spirit or even just the psyche, but we tend to just smash all those things together. It’s like we’re writing religious songs for the animal side. We’ve got songs that feel like party songs but if you look at it closer, it’s something more cerebral. So for the people who want to dig in and connect all the weird crosswires, the song can turn into something else.”

These crosswires help explain the songs strange lyrical fancies and genre fusions. And what songs. Marigold, sounding the most like Needle with its heavy gutterslam dive piano and standard 12-bar blues progression but featuring more warmth, needs to be cranked up on the car stereo. The poppish, doo-wop grabbing Take it As It Comes is as The Police as The Business is ever going to sound. A slight Caribbean vibe pervades, as if the band is auditioning for a riverboat cruise that somehow wandered near the Bahamas.

In the T Rex grabbing homage Black Light, Walston starts in a tortured falsetto, leading to the chorus “In the black light/ in the black light/ your love,” and you can’t help but want to dance. Pow-wow drums emanate at the beginning of Sweat Shock, then comes a tighter, crunchier electric riff of Aerosmith’s Walk This Way. Drummer Steve Colmus’ technique impresses; always controlled but not stiff, complex but not over the top.

Much needed variety comes in with the piano-centered Nobody Knows, with its late era The Beatles chord changes and falsetto with Biblical phrasing (“I feel the warmth of sin and the hardening of hearts”). The end has a choir of high-pitched singing, melodic and dripping in sweetness, a perverse, cheery Beach Boys symphony.

Hard Times shows Walston singing over a riff that wobbles pleasantly enough with his falsetto, in a track that starts, “If Daddy says the mountain’s come off you must believe him true/ I will build a science and create a world for you/ I’ll protect you from yourself and the tendencies you’ve shown/ cause the world will see a man like you as weak and under grown.” Foot pedals and understated percussion; The Black Keys’ fingerprints are smeared across the production of Same Days, but it somehow doesn’t sound derivative. The album ends with Midnight Cry, a beautiful ballad.

One can’t help but be impressed with how every song is critical to Essential Tremors’ progression, each song being placed in just the right spot. In an age of 75-minute double album epics, Walston and his crew have created a tight, lean work that never drags, one that is full of melody and the liveliness that rock ‘n’ roll needs. It’s only March, but come the end of 2014 surely Essential Tremors will be held up as one of the year’s best albums.

J Roddy Walston and the Business MP3s or CDs

J Roddy Walston and the Business on Spotify