Jack Peñate – Everything Is New 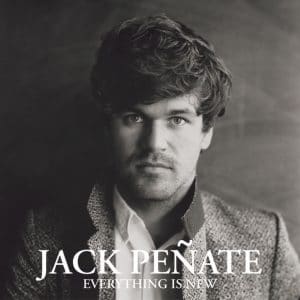 A ‘reboot’. That’s the name given to TV shows which take the basic elements of an old brand, and rebuild it in a whole new image. Take Battlestar Galactica for instance – in the ’70s, a cheesy sci-fi show starring Face from The A-Team. Rebooted, it was turned into a richly complex socio and political drama which just happened to be set in space.

A reboot is what seems to have happened to Jack Peñate. When he first appeared in 2006 he was unfortunate enough to be lumped into the LDN scene, just as the press were tiring of it, and he wasn’t helped by a debut album, Matinee, which was notable only for its mediocrity. He also had a really annoying little dance that frankly did him no favours whatsoever.

So it’s safe to say that 2009 was not desperately awaiting a Jack Peñate comeback. Yet the aptly titled Everything Is New is one of the year’s biggest and best surprises. Out goes the overtly frenetic pace, the over-reliance on rockabilly and dropped aitches and Mockney vocals. In comes a sumptuous new synth-led sound, a big, epic production from Paul Epworth and an album full of euphoric pop songs.

It won’t be that much of a surprise for anyone who’s heard Tonight’s Today though, released as this album’s first single last month. Successfully mixing Afrobeat guitars and vocals, some dubstep beats and a contagious chanted chorus, it’s a contender for one of the singles of the year. Second single Be The One repeats the trick and then some, calling on a huge choir to provide backing vocals, and a brass section to give the song an irresistible swagger.

There’s a celebratory, party atmosphere throughout much of the album – like Guillemots, Peñate has a knack of creating a party atmosphere from the most unlikely of sources. Take the bluntly titled Let’s All Die for example – apparently inspired by funeral processions in New Orleans, its a spirited tribute to life and death with a definite South American tinge to it. “It seems to me there’s something right in celebrating the end of your life… when a life is over, let’s not cry” before bursting into a joyous chorus of “Let’s all die”.

It’s certainly indicative of the influence of Norman Cook, who worked with Peñate during the early sessions for the album. So Near is immediately infectious, sounding like a carnival recorded in someone’s bedroom, while the title track has a blissfully laid-back feel which is perfect for the upcoming summer months.

Producer Paul Epworth deserves much credit for Peñate’s new direction. He’s successfully transferred the edgy, jittery feel he bestowed on both Friendly Fires and Bloc Party and given it a warm, expansive setting. He’s made Peñate sound very at home too, sounding much more natural and relaxed than he did on Matinee, his vocals providing a perfect foil to the big bursts of gospel choir that often appear throughout the album.

The party atmosphere only subsides for Every Glance, a strangely doomy number with Peñate solemnly intoning “take your hands from my shoulders and let me stand” before the massed backing vocals kick in with “liar, bully, coward, thief”. Yet even here, the constant cowbells and beasts in the background mean that the atmosphere never gets too downbeat.

At only nine tracks long, Everything Is New never outstays its welcome, and is the perfect riposte for anyone who had previously dismissed Peñate as a scenester who’d got lucky. The reinvention of Jack Peñate starts here.