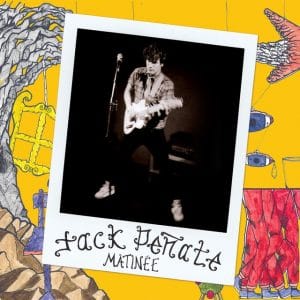 Jack Peñate has been a busy boy. He quit his degree in Classics at UCL when it became clear that music was his calling and he signed on with XL Recordings. One year on and he has toured the country, danced his socks off through the festival season, been jogging for his music videos and his ska fuelled, high energy singles have received plenty of airplay. So with the release of his debut album Matinée I’m not sure when he’s going to be able to enjoy all of this success.

Truth be told this indie pop album is little more than pretty good. It follows on the trail of more original, more colourful predecessors such as Lily Allen, Jamie T, Kate Nash and even The Kooks. What do these guys all have in common? A rather self indulgent and privileged London outlook for the most part, yes, but their music is also definitive. Unfortunately Jack Peñate is not adding anything new to the dialogue.

Mostly recorded and produced by Jim Abbiss, who has worked with Arctic Monkeys, Editors and Kasabian has led to a super polished and suitably edgy sound to the album. Its rockabilly swagger is infused with references to Blues legend Bessie Smith, chords reminiscent of the early Libertines and the perky snap of Calypso. Peñate said he wanted to create something joyous and he has accomplished that. It’s an infectious collection of tunes that I can imagine humming along to, bouncing to the beats from Brixton to Bloomsbury and back. However I can’t help but feel that I’ve been saturated with similar sounds already and I yearn for something singular, something that cries out from the bursting bandwagon.

Predictably enough the summer anthem Spit At Stars is the first track. He introduces himself as a pretty cool guy, full of the all the positive energy of a big dreamer. Bold and vulnerable he tells us his aspirations are “loose at the seams”. Learning Lines (the only track on the album produced by Philadelphian electronic maestro RJD2) prominently uses this theme too when he sings “dreaming has become my life, I’m finding it hard to move on”. It’s a great mood to be part of during the forty minutes.

The other theme that’s pretty major here is infatuation. Love for his home and love for his girl are presented in charming songs, full of tenderness. My Yvonne (which features another rising star, Adele, on backing vocals) uses some sweet string composition and Have I Been a Fool’s self-deprecating confession is preciously close to my own boyhood secrets.

Aside from the album not standing out from the competition the individual tracks have trouble standing out from each other. They all sound a bit the same. A track that tries to get a little grittier is Run for Your Life. It’s about a mugging and conjures a misanthropic view of the world but instilled with Jack’s repetitive pop chorus is surprisingly catchy. The world still seems brighter again.

Finally, his voice is gentle over the closing track When We Die. It’s a shame that it’s such a sad but smart reminder of how temporary the popularity of this music could be.

There will be a certain group of young optimists who will unashamedly skank in the street to each lively track but how much longer will they be engaged? There is real quality here though and it is a safe bet to buy so I wish him luck.