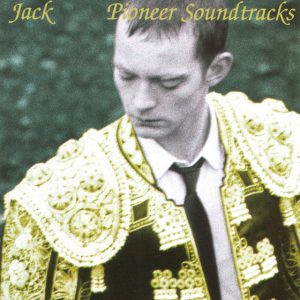 I hadn’t heard of Jack in 1996, when Pioneer Soundtracks was released. By the time I was seduced by the wildly romantic, lush (or should that be louche) tones of singer Anthony Reynolds, and the bewitching, innovative music he and Matthew Scott conjured up between them, it seemed the good times were already almost over.

It all started so well. A deal with Too Pure, the embryonic band having the gall to ask for Pete Walsh, who’d worked with Scott Walker among luminous others, as producer on the first album, and amazingly getting him; a clutch of rave reviews, and a follow-up album (The Jazz Age) that displayed none of the notorious difficulties associated with the second album.

But Jack seemed to have a built in self-destruct button that alienated record labels, and the third and last album, The End Of The Way It’s Always Been, was released on the obscure Crépuscule label after a fall-out with Too Pure related, some say, to the wayward antics of Reynolds and Scott.

Anthony was experimenting with solo projects – notably his superbly atmospheric Jacques album To Stars, but gigs had become nervy affairs and while long-standing fans were loyal, new ones could be put off by live performances that frankly didn’t live up to past glories. A final fall-out between the two prime movers of Jack signaled the end in 2002.

But now, with the re-release of this extraordinary album, we have the chance to re-assess Jack. Was it really as good as the press said at the time? Yes. It was. If anything it was even better, and the fact that ten years later it still feels fresher and more exciting than anything I’ve heard recently speaks volumes.

From the opening soundscape build you know this is going to be something good. …To Lights is a sprawling track that lays searing strings over driving percussion. Reynolds’ soft Welsh lilt speaks lyrics that could be a London version of Under Milkwood: ‘Dirty is in her lover’s arms / it is London in the morning / behind them the skyline burning / the riots meaning nothing…’ Then it develops into a marvelously intertwined tapestry of sound, with competing voices and repeated motifs – ‘These are beautiful stories for ugly children.’ Mesmerising.

Wintercomesummer, White Jazz and the brilliant Biography Of A First Son are upbeat numbers in which we get the first inkling of how much fun Jack can be. Terrific rock beats combine with poetic storytelling: “Above ourselves looking down, a glittering tinsel town / those buses full of half lives, the lovers cars at traffic lights, adultery, Sapphic tendencies / bored lovers on a Saturday, virgins on the verge of disappearing…” It’s no surprise that Anthony Reynolds has also published slim volumes of poetry.

One mustn’t underestimate the contribution of Matthew Scott, however – Reynolds may be the most prominent member of Jack but there’s no doubt that in later years, sans Scott, there’s something missing.

Filthy Names takes us into darker territory with the splendidly sleazy story of two “pissed up whores”, made sublime by the beautiful melody and perfect strings and dramatic by the crashing re-entry of guitars towards the end.

I Didn’t Mean It Marie is classic Jack, celebrating Reynolds’ gorgeous voice and preoccupation with the melodrama of sex and death: “Set fire / on some rented bed / saying my Catholic prayers / as I’m giving you head.” F.U. and Hope Is A Liar are quietly beautiful songs of love lost, both with atmosphere in spades.

Dress You In Mourning is the other real highlight of this almost uniformly brilliant album. Inspired by the bullfighter El Cordobés it typifies Jack’s songs – mournful but uplifting, a perfect balance of great melody, inspired instrumentals and Reynolds’ rich voice.

The second CD of this set is full of delightful bonus tracks, some previously released as singles or on EPs (the best being Kid Stardust, The Ballad Of Misery And Heaven and the very funny Ballad For A Beautiful Blonde Eye) or on other albums (The splendidly melodramatic Nico’s Children, Saturday’s Plan). The album is rounded off the demo of Biography Of A First Son and six live tracks recorded in Paris in 1996: these are good to have, especially as Jack’s live performances were all too rare, though the quality isn’t as good as the studio material.

So, just in case you haven’t got the message – if you haven’t already got Pioneer Soundtracks, you need it, and even if you have, you’ll want the additional tracks. So no excuse whatsoever not to buy…