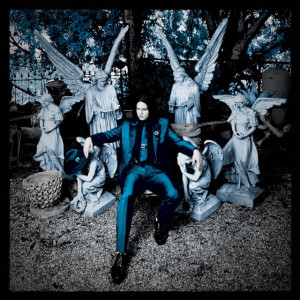 With all the kerfuffle and hubbub plaguing Jack White, from the curmudgeonly grump-fest spewed at a swathe of musicians (including Lana Del Rey, Adele and The Black Keys), the subsequent apology, and the gimmick-riddled Record Store Day antics, it’s easy to forget what made White a living legend in the first place. Well, yes, The White Stripes, but more generally, his music.

A modern-day master of the six-stringer, he’s torn straight from the annals of history, back when rock was rawk and guitars were for shredding with aplomb rather than gently fingering (*snigger*). Whatever your opinion of Jack White the man, denying his insane talent seems downright ridiculous. With that in mind, his new solo album Lazaretto, the follow-up to 2012’s Blunderbuss, should be something to welcome, right? After all, scoring a Number 1 album in no less than five countries with your debut solo record, though sales don’t necessarily equate to quality, should ensure that the following release is something worth more than a cursory glance.

Arguably the most noticeable things about Lazaretto as a whole is White’s penchant for dabbling in the bluesier realms. Let’s stow those Black Keys comparisons, lest White comes a-knockin’ to crack you round the noggin. There is a more prevalent reason though – White has always been all about the blues. It may not have always been obvious, but working in a more solitary capacity seems to have drawn out his passion for playing in the genre, as well as more traditional folk and country-western styles. One thing’s for sure: this is a hugely American album, steeped in the sound of the US from the Mississippi Delta to the deserts of Nevada. There’s little sign of his Detroit roots, at least on the surface – but let’s be honest, he’s been there many times before.

As testament to that, you’ve got the Fleetwood Mac-esque folk-rock of opener Three Women, dainty Americana fiddle-jig Temporary Ground, High Ball Stepper’s psych slide guitar and ZZ Top-isms, the ’70s blues rock’n’roll in Just One Drink… the list goes on. Just as Blunderbuss was a mishmash of styles, Lazaretto dithers in a varied bunch of pigeonholes. They are, however, much nicher, and White lingers in detailed looks at traditional music of the United States as opposed to the wider net of ‘rock’.

And, you might be surprised to know, it freaking rules. White’s ability to mimic and ape the icons of yesteryear, rather than caterwauling with his trademark howl, is phenomenal. There’s no direct copycat scenarios, but his efforts on Lazaretto embody certain moments in American musical history – not all of it, mind, as there’s little funk, soul, R&B etc. etc. etc.

Oddly, the standout moment is one that doesn’t really adhere to the record’s muscular, stringent themes. Would You Fight For My Love?, sounding more like his forays with Alicia Keys into OST-dom, is a Southern Gothic belter. It’s macabre, with the rough pitter-patter of percussion and Bauhaus wails, with screeching B-Movie axes and marvellous, swaggering rock anthemry. There are also squalls of parpy fart-bass of the sort that occasionally permeated tracks like Icky Thump, if that’s your kinda thing.

This is another whopping, XXL effort from White, proving that although he may get roped into the celebrity dross every once in awhile, he can still manufacture art in spite of distractions. Lazaretto is an album of singles – it’s also a pretty revelatory record of healing and perseverance for White – that bounds rapidly through America’s South from the ’50s-’70s. It’s another great side to White, and another feather to stick in his pretty feathery cap.