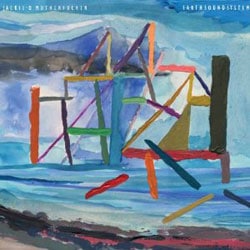 It’s been a long, involved, convoluted but always compelling development that “cult Portland, Oregon psychedelicists” Jackie-O Motherfucker has undergone. In the 14 previous albums to date since their 1995 inception, the band have run the gamut of experimental sounds, from soft nature-drenched skewed balladry to challenging drone and improvisatory. Now in one of their most settled and established line-ups they bring us Earth Sound System, following on from 2009’s terrific Ballads Of The Revolution. Where will their ongoing journey take us next?

As before, the band once again only furnish us with six tracks this time round. Rather than the cohesive offering you would expect from more conventional musicians, there seems to be quite a marked division in play here between contrasting song “types”. Opening track In The Willows typifies the first type. The quiet acoustic guitar with which it is ushered in sets the tone for a soft gentle piece, downbeat and lovelorn. Drawing from pastoral images (“the willows”, “endless wind” “rain of tears”), this is a dour tale of regret, nostalgia and heartbreak, as the singer recalls his lost love who “gathered the sun all in her fist / gathered the moon all around her wrist”. The vocal is sombre, drawling yet quavering all at once, and some of the imagery is striking, for all its pessimism: “clouds are shaped like disaster”.

In a similar vein are Bring It To Me and Dedication. The former – perhaps referencing Sam Cooke‘s much-covered soul standard Bring It On Home To Me (these precise lyrics are used at one point) – is another gentle acoustic romance, once more tinted with allusions to nature (“smells of apples and grass”). The voice here is warmer, more engaged, more human-seeming and intimate, with the busier (twangy, rattly, synth-flecked) backing serving as a counterpoint to the melody.

Dedications, the last of the triptych of more conventional songs, is something of a mantra. The line “This is dedicated to / the person who / is trying to find / the next right thing to do” is repeated over, over and over again until it seeps into the unconscious. Occasional (slightly) manic bleeps and glitches aside, there is nothing here musically to detract from the message, which seems to be the track’s feature of overriding importance.

Dividing up these tracks are the paired pieces Raga Joining and Raga Separating. Both are far more free-form, vocal-free and unconventional in nature. Of the two Raga Joining is the more satisfying – its beats, tinkles, squiggles of noise often cohering to create the impression of the noises from a rainforest, passed through an amplifier. Raga Separating is vaguer, feeling yet more randomly put together and improvisatory to the point of incoherence, all asynchronous rhythms, period irregular gaps and spaces, short drum rolls and disparate noises.

Somewhere between these two extremes of style, sits the closing – and most satisfying – track Where We Go. This is hard, crunchy noise, with driving, rolling drums, heavy and deep deep riffs that builds to a crescendo that is apocalyptic and impressive. Still recognisable as a deliberate “track” rather than an collection of sound-effects, yet smart, innovative and dramatic, it is far and away the most interesting, listenable yet challenging, thing on this patchy and unfocussed album.