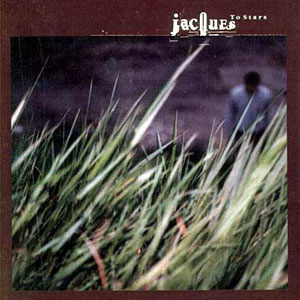 Anthony Reynolds may not be a name you’ve heard of before. Being resolutely indie in his outlook, he seems not to have actively courted fame, but a brief peek at his musical output so far indicates a man very much at home being a musician rather than a star.

With To Stars, he has resurrected his band Jacques, formed of himself, various people he wanted to work with (including The Divine Comedy‘s Bryan Mills) and various members past and present of his other band, Jack, and hinted that he may well reluctantly fit into the pop star mould.

The change to Jacques doesn’t necessarily mean everyone else on the album is French (although there is at least one tune on this album which sounds French – Sad In The Sun, complete with accordian) – but the obvious influence of European music is a welcome breath of fresh air to the UK indie scene.

It is an accomplished work, veering from French cafe music to Abba seasoned with Madness in a fabulous reworking of The Day Before You Came, but the first single, Blue Party, sounds like Pulp circa 1994, just before they became huge.

It is almost always a very personal work, from the description of a working day on The Day Before You Came to the remembering of a former romantic attachment in The Orchestra I Loved (surely the only song in history to begin with the line: “I remember how we fucked.”).

It is an indie album with enough pop thrown in to be taken any way the listener pleases. It has very little in the way of traditional “indie” pop music (Stereophonics, Manics) and much to recommend it to people who would enjoy listening to the intricate arrangements of piano, accordian, vocals and bass. This album may be indie, but it is also an album that simply cannot be dismissed.