by Sam Shepherd
published: 30 May 2020 in Album Reviews
Tweet 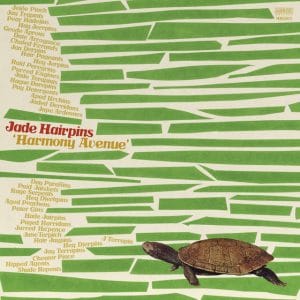 One of the most fascinating things about Toronto’s punk geniuses Fucked Up, beyond their epically thought out releases, is the sounds that the offshoots of the band produce. We’ve already been blown away by the quite brilliant Young Guv, and now it’s the turn of Jonah Falco and Mike Haliechuk in the shape of Jade Hairpins. Originally, the material was going to be an addition to the world of Fucked Up’s Dose Your Dreams album, but soon took on a life of its own, and this is most definitely music shot through with life and energy.

When the band’s Motherman appeared on 12” single a couple of years ago it seemed to be a definite left turn. Perhaps, more appropriately, it was very clear that Jade Hairpins was a project/band that stood entirely on its own feet, occupying a a completely different musical world to that of Fucked Up. Motherman closes Harmony Avenue and takes its cue from New Order and the earliest days of the UK rave culture. Not so much having it large, but something of a pleasing come down. Its place at the end of the album is entirely justified, even though it was originally the opening salvo from the band.

To begin at a different beginning; Harmony Avenue kicks into life with J Terrapin, a song that introduces Sparks to Dr Seuss. With some smart word play (depending upon your position on puns), a spring in its step, a glint in the eye and a tune its heart, J Terrapin is smart and seemingly throwaway pop. However, spend more time with it, and it’s clear that Jade Hairpins is predominantly about writing crafty earworm tunes that delve into pop culture to create literate, intelligent and brilliantly catchy songs.

Don’t Break My Devotion carries on mashing burbling synths into smart bass lines and busy guitars. Somehow it manages to take INXS on a scenic trip to the Hacienda via Electric Avenue. If all this sounds a bit like cramming too many pop influences into one song, fear not, Falco and Haliechuk’s editing and songwriting nous is keenly focused. A case in point is Post No Bill which comes across like a Cubist Prince composition. Tightened funk chops, slight industrial touches, call and response vocals, and woozy keyboards sounds like a hellish mess. Somehow it still manages to sound like a fine dollop of stripped-back sunkissed pop.

Even though Falco, Haliechuk and their Hairpins cohorts appear to be cramming in influences from almost everywhere (acid house, new wave, funk, punk, psychedelia and more), the whole album is incredibly coherent, lucid, and most importantly it’s the of thing that might just define a summer spent outside. Assuming that’s ever going to be possible this year. A bit of positivity is what’s needed though. When Jade Hairpins are writing heartfelt tributes to Broadstairs Beach, delicate pop tunes like Dolly Dream, or songs that could well double as the theme to a 1980s sitcom (Truth Like A Mirage) it’s hard not to be swept up in the sheer glee that runs throughout the album.

Yesterdang perhaps sums up the band and the album most fully. It’s pastoral wonk-pop is utterly delightful. It’s sparse and spritely and it allows Falco to really explore the full range of his vocals. It’s here that he expresses the cycle of life in nature, but also reminds us that the sun will rise and the clouds will part. It’s just a single example of positivity on an album absolutely crammed with it. Jade Hairpins are the band we need right now.