James – All The Colours Of You 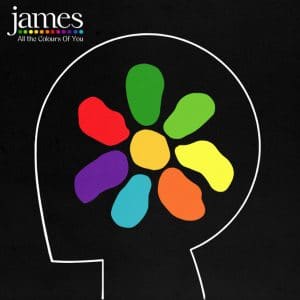 It’s been almost 30 years since James made the leap from ‘little known Mancunian indie band occasionally namechecked by Morrissey in interviews’ (a VERY long list, for those who remember those days) to stadium-slaying behemoths whose fans sit down in unison for their biggest hit.

Since the band reformed in 2007 after their split six years earlier, they’ve cannily walked the line between riding the nostalgia train while releasing a series of albums that, while they may not hit the heights of the likes of Laid creatively, sit well in their discography.

All The Colours Of You is very much in that James vein – full of stirring anthems that you can imagine being belted out in the arenas of the country. Unlike many of their contemporaries though, there’s a freshness about the album, together with a few surprises.

The band’s 16th album is very much one of its time. It may have been partly written and recorded before the pandemic, but the events of the last 15 months permeate through almost every track. There are songs about lockdown, environmental chaos and living in Donald Trump’s America (where lead singer Tim Booth has lived for many years).

That may sound a bit depressing, a notion that’s not displaced by the sound of Booth hollering “we’re all going to die, and that’s the truth” on the opening Zero. The fact that it’s set to a rather dirge like electronic slow-pace makes it a strange choice to open the album.

Thankfully, with the title track, we’re back on more familiar ground. A big bustling swirl of a song, with a chorus that makes you want to jump up and sing along, there’s some lyrical nods to lockdown (“Haven’t hugged a human since the end of May”) and to the former inhabitant of the White House (“The President’s your man, he’s the Ku Klux Klan”).

Recover, a song about Booth’s father-in-law dying of Covid-19, is also necessarily emotional, with lines like “Will he recover, he can’t breathe” and “We will remember your wicked sense of fun” serving as a rather lovely tribute. The song’s gently swaying groove also stops it from becoming too maudlin, even if Booth’s lyrics may prove a bit too traumatic for anyone who’s lost a loved one recently.

Wherever It Takes Us harks back to the band’s experimental album with Brian Eno, Wah Wah, full of odd little ambient noises, a near spoken word vocal from Booth and some choral vocals for the uplifting chorus. It’s moments like this that All The Colours Of You really hits its mark – mixing James’ more accessible side with the experimentation that they’ve always been interested in.

For some people, of course, some of Booth’s lyrics may lack subtlety (Miss America sarcastically praises his adopted country’s “love of guns” and the election of “the man with a tan”) and some of the album does feel like the lyrics have literally been ripped from the headlines. However, even on the album’s weakest tracks (mostly towards the end of the record), there’s still an energy and way with a chorus that would shame bands half their age.

Even at its most introspective, All The Colours Of You is an often invigorating return from a band who, despite their veteran status, still have their collective finger on the pulse.