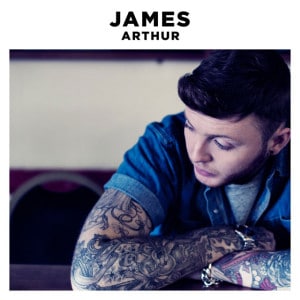 You have to feel for James Arthur – being a male contestant on The X Factor is a rum old business. A cursory glance at the show’s progeny reveals that the male solo ‘stars’ are far more likely to end up becoming punch lines (Steve Brookstein, Leon Jackson, Joe McElderry) than enduring successes. The show simply doesn’t know what to do with men whom it can’t push into shiny boy bands – a problem stemming from the wider lack of suitable role models.

While pop is packed with a dazzling myriad of female solo stars, males – from Elvis Presley through George Michael all the way to Justin Timberlake –  tend to share at their core a seriousness that The X Factor simply cannot imbue. In a show premised on mocking notions of authenticity in music, to be seen to sincerely aspire to a singer-songwriter template is to be a cringe-inducing embarrassment.

Instead, the product of The X Factor is supposed to be infinitely malleable and always friendly – it’s notable that the show’s one enduring male success, Olly Murs, quickly made a career for himself as a professional cheeky chappy television presenter on The Xtra Factor. To distance yourself from the show and attempt to focus on ‘the music’, as Matt Cardle did, is viewed as ostentatious pretension and is almost certainly career suicide; yet to do what you’re told is almost certain to result in Mother’s Day covers album and West End musical hell.

Arthur’s first single, a cover of R&B singer Shontelle’s Impossible, walked the tightrope between these fates quite magnificently. An inspired choice, it immediately banished notions of the over-earnest plodding that claimed Cardle and pushed Arthur as the kind of unsectarian pop star you need to be to succeed post-The X Factor (a message similarly sent out by his recent cover of Miley Cyrus’ Wrecking Ball). Most importantly, it was cracking, with Arthur’s vocals transforming the song into a doom-laden melodrama. It was so successful, in fact, that it is re-tread in this debut album, with Recovery closely following its template and adding self-conscious signifiers of modern British urban music.

These trappings (eg. ominous drums and spectral snippets of female voices floating into the mix) are all over the record and it quickly becomes clear that the problem of which male pop star template to follow has been dodged by closely referencing… Emeli Sandé. Her producers and songwriters form the core of this album, with second track Get Down in particular invoking Sandé’s own Heaven, which was in itself heavily indebted to Massive Attack’s Unfinished Sympathy. Here, Get Down only avoids being an homage to an homage by bolting on its own take on Rob Dougan’s Clubbed To Death.  Continuing on the Sandé trip, the lady herself pops up for a duet on Roses which opens with Arthur rather appositely singing “I could have chose anybody but I chose you.”  It’s a strong song yet Sandé’s low-key vocal proves an ill-match for Arthur, whose forceful dramatics come off as histrionics in comparison.

Lead single You’re Nobody ’til Somebody Loves You, co-written by the team behind Little Mix’s Wings (and, yes, Emeli Sandé’s “Read All About It (Part III) fares better at developing an identity for Arthur. Opening with a wryly ‘authentic’ squeal of guitar, it’s a compelling update of the Northern Soul sound and sounds quite unlike anything you would ever expect from The X Factor. The tributaries of British soul music feeding into this album continue with Amy Winehouse’s producer Salaam Remi contributing the warm jazz inflections of New Tattoo; elsewhere, however, we find songwriters like Richard Stannard (most renowned for his work with the Spice Girls) and Steve Robson (Take That, Olly Murs, One Direction) respectively contributing tracks Lie Down and Is This Love? which are certainly catchy but hollow, with a feel of having been written by committee.  More successful is Certain Things, a collaboration with duo Chasing Grace which hits home with its tender emoting.

The tension between the urban music which clearly makes Arthur tick – he frequently references his love of acts like Wu-Tang Clan – and the demands of X Factor populism come to define the album, which rarely stumbles but also rarely takes flight. There is a real sense of Arthur’s idiosyncrasies being reined in: you don’t, for example, expect an X Factor winner’s debut to feature a song called Suicide, yet the track turns out to be a disappointingly impersonal boilerplate take on a failing relationship. When Arthur is fully indulged in the closing Flyin’, a brief curio which finds him rapping in an American accent, it just sounds immensely odd given what’s come before.

There is much potential here – Arthur clearly has far more to offer music than the Marcus Collins‘ of this world – yet it feels frustratingly undeveloped. The album is certainly a welcome change from the usual X Factor fare but it remains to be seen whether its tense jumble can satisfy an audience which has come to expect, well, not much at all. It’s to be hoped that Arthur is able to find his own musical identity – he’s too good to be left to pop up on Celebrity Big Brother in a year’s time.