by Steven Loftin
published: 16 May 2018 in Album Reviews
Tweet 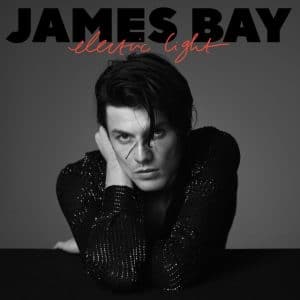 Haircut aside, James Bay’s return was always going to be of interest. His rapid ascension from nobody to somebody via debut Chaos And The Calm meant his next move would have to be well thought out, and with Electric Light he meets all expectations, if not via any groundbreaking territory.

Kicking off an album with cinematic narration signals a bold open, especially when it’s such an evident scene setter. It’s clear that he’s here to prove that he’s more than the chart-topping sound of Hold Back The River, and has broken those shackles in favour of a grittier sound that takes a little bit of everything and churns it into an album that’s both brooding and confident.

Casting aside the scene-setting opener, Wasted On Each Other is led by a blues-inspired sound that bares its teeth. It’s not a modus operandi that runs deep throughout; each track is a different chapter of a much grander story. Pink Lemonade opts for a less astute sound, and instead revels in its driving nature, which weirdly does make you quite fancy a glass of pink lemonade. There’s probably a study to be done into that effect, but whatever it is, Bay has it.

Wild Love and Us both cast their eyes back to his previous efforts, which somewhat diminishes the idea that this album could’ve been a complete step away from what came before. It doesn’t leave a bad taste; it’s just there, sticking quite easily in your head.

Though swiftly taking a turn with In My Head, Bay plays narrator throughout the verses, while the choruses have a soulful feeling which it’s impossible not to be swept up in.

Continuing the trend of cinematic scoping, there’s a handy little Interlude that keeps up the concept. There may be an underlying theme wherein Bay has created a rom-com concept that needs to feel edgy, but it’s not obvious. Swiftly moving on, Just For Tonight brings things back around to more driven, confident sound, which properly kicks the second half into life.

At the point of Wanderlust, a strange thing starts to happen. You warm to the album, it feels like you’re now a part of the scene that Bay has set up, you the protagonist and Bay the director. Even the guitar licks feel natural, but again by no means groundbreaking.

I Found You swaggers in from the misty fade-in, switching the rocking driving sound into an R’n’B, soul-infused sound – choir backing included – and finds Bay kicking his vocals up to the maximum, and with stringent meaning. Even the retrospective Sugar Drunk High gives you the impression that it’s a life you’ve lived. Without a doubt, Bay has a slick ability to transport you into whatever world he determines, a testament to his songwriting ability. Stand Up and Fade Out are suitable endings to the story, with Bay leaving room for the resolve of Slide which leads out with the gentle piano above more spoken word.

This adds up to a solid album that presents as an immediate difference to what went before, even if it does not roam too far from the grounds of its creator’s past. That certainly doesn’t mean it can’t be enjoyed. Electric Light is a thoroughly immersive ride that shows James Bay has plenty of ideas brimming in that now hatless head.