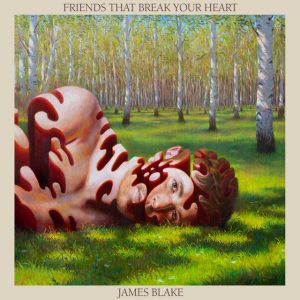 Playing a game of ‘where are they now?’ with dubstep producers can be rather illuminating. Skrillex has camouflaged himself amongst the American pop scene with the help of Diplo; Skream puts out high-quality tech house bangers with remarkable regularity; Benga is in early retirement due to mental health issues, while sometime Mercury Prize winner James Blake is… where, exactly? His fifth album Friends That Break Your Heart will probably go down in history as the only record to feature Metro Boomin, Rick Nowels and his partner Jameela Jamil in the credits, and the album does the best it can to tie these strands together.

Whereas the Blake of yesteryear would use electronic loops to give his lyrics more weight, by this point the balance has almost completely shifted to conventional verse-chorus structures. Show Me has the most memorable hook, a duet with Monica Martin about a partner that never opened up (“I heard you control love / it’s just not come out for me / I heard you had a sweet way / that I have yet to see / I wish you’d show me / I wish you’d show me”) while Life Is Not The Same ups the intensity with the help of production duo Take A Daytrip.

Blake’s affinity with rap music, well documented ever since RZA’s guest verse on Take A Fall For Me, is indulged with the JID and SwaVay features on Frozen. Both contributions are very enjoyable, particularly SwaVay’s unlikely story about the three of them on a crime spree in Atlanta, but it’s an open question what role they serve on an introspective album about relationships and friendships. Coming Back with SZA also pays tribute to contemporary urban trends, but melds this with a solid emotional centre and a nutty beat-flip a minute from the end.

After the magic of 2019’s Mile High, the biggest surprise of the album is how bad the Metro Boomin collaboration is. Foot Forward rides a clunky piano sample and 808s with self-pitying lyrics that dip in and out of a tuneful melody at random, a demo which should have remained as such. Famous Last Words fares a lot better, featuring a mid-tempo muffled beat and delicious harmonies across the chorus, as Blake laments his inability to move on (“I can’t believe I’m still walking around a believer / I should have lost it, I should have lost it by now”)

If one is to weigh up the evidence of this along with the record’s title track, it would appear that Blake gets the most consistent results in 2021 by being a glitchy lovelorn balladeer. He is never more comfortable than in his role as professional sad lad, while the upbeat sections feel increasingly redundant. Case in point: the utterly baffling I’m So Blessed You’re Mine, which veers into a bassy drop at the request of no one, rendering the song’s heartfelt verses a complete non-sequitur. The song could have been instantly improved had Blake leaned into being a songwriter more and an electronic producer less.

If I’m Insecure wraps up the album with tumbling synth triplets and an arrangement so low-key it’s practically a whisper for the verses, which just makes the blaring chorus all the more satisfying. As the final chorus kicks in, an arpeggiator that starts off innocuous enough starts distorting and drawing a noisy vapour trail right through the song, a flourish which sounds inappropriate on paper but isn’t. Throughout Friends That Break Your Heart, Blake is trying on different sounds, different styles, and producing some good music along the way, but he ends the record still unsure of where he should be.