James Blake – The Colour In Anything

by Martyn Young
published: 13 May 2016 in Album Reviews
Tweet 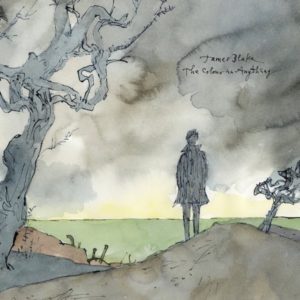 Throughout James Blake’s career, a duality has been at play in his music and his public persona. There are few other musicians in the world that can successfully straddle genres like Blake can. Equally adept at captivating an eager audience on the dance floor or providing a comforting, consoling, melancholy piano lament for the broken hearted, Blake is part electronic auteur and traditional balladeer.

The duelling disparity of his sound got off to an intriguing yet slightly muddled start on his hype fuelled 2011 self titled debut before finding smoother, wonderfully lucid waters on the Mercury prize winning follow up, 2013’s Overgrown. Yet despite that album’s almost faultless success, Blake wasn’t happy. Something in the producer’s life was missing.

The Colour In Anything, following hot on the heels of his appearance on Beyoncé‘s Lemonade, represents Blake’s desire to capture something, spiritual, emotional and heartfelt in his music, to find rapture in subtlety, splendour in detail. The album charts a journey in Blake’s life with a lover he’s either lost or with whom his relationship has changed irrevocably. As such it’s the deepest and most evocative James Blake release yet. Perhaps the strongest indication that this album is Blake’s grandest, most meaningful statement is in its length. Seventeen tracks running to well over an hour is a lot of music to take in, but there’s something deeply compelling about the way Blake holds the listener with clever, nuanced and detailed electronic beats and the very human warmth of piano aligned with his powerful and increasingly confident vocal placed front and centre that your attention rarely wavers.

There’s one key aspect though about The Colour In Anything that renders it heart stoppingly affecting in a way that his other releases haven’t quite managed. The words. As well as evolving as a producer, Blake has grown into a lyricist of stark beauty. The idiosyncratic electronic producer has become a masterful songwriter. Blake’s words on this album are the central thread that hold everything together. On the opening track Radio Silence, Blake is pained and pleading, desperately intoning that he wants to see his lover again: “But in my heart, there’s a radio silence going on.”

Elsewhere, Blake questions the whole concept of relationships and love on the delicate piano ballad of F.O.R.E.V.E.R. He employs imagery and metaphor to emotive effect with lines that resonate like memories ingrained deep in your heart: “Don’t use the word ‘Forever’, we live too long to be loved/people change and I can be tethered/we think we are the only ones.” Amidst the sheer beauty of the songs, there is more than just surface area prettiness at work.

The echoes of Blake’s electronic influences are woven into the fabric of even the most delicate and simple piece. Timeless is a dark and alluring piece of smokey dub building to a feverish crescendo while the sci-fi film noir techno of I Hope My Life 1-800 mix namedrops his renowned 1-800 Dinosaur DJ collective in its title. The filmic strings and graceful dislocation of Two Men Down could only be pulled off by someone with Blake’s skills.

Modern Soul is one of the album’s highlights, and that’s as good a term as any for the music Blake is making. Unlike his previous albums though, he’s not all on is own. As his musical vision has expanded the producer has opened up his sound to outside influences resulting in a sharper, more clearly defined, deeper record. Rick Rubin produces a number of songs, while Justin Vernon of Bon Iver provides a guest vocal on the stunning I Need A Forest Fire. Ultimately though, this is James Blake’s dark night of the soul. He allows you to delve deep into his psyche and this openness and warmth makes him relatable and perhaps more humane in a way his music has never quite managed before. The result is a staggeringly impressive and confident third album from an artist who has reached the very peak of his powers.