James Blunt – Some Kind Of Trouble 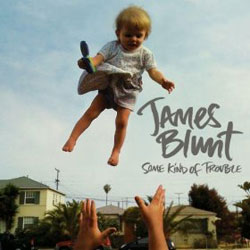 Luck serves some of us less than others. For James Blunt, hewrote a song called You’re Beautiful and everything fell kindly intoplace. For the rest of us, we have the pleasure of watching Bluntgetting richer and richer, from one album to the next. A figureof mockery he may be, but you imagine he manages to see past that whentaking residency in Ibiza, writing his next gold-selling album.

Some Kind Of Trouble is an upbeat affair that may indeed conveyBlunt’s current state of comfort. And although the former army officerdeclares himself somewhat separate from a Hollywood scene manyassociate him with, there’s a distinct whiff of Americanism here; withthe song’s opening track spelling out what’s to come with a chorusline of “We’re all spinning on our heels, so far away from real, inCaliforn-i-a”. Album for the recession-hit, this is not.

But can Blunt do right? One minute he’s declared a sappy, na�vefool who writes songs about beautiful girls and releases them asNumber 1 singles, the next he’s milking his subsequent happiness forall of us to see. This is a cheery album; sickeningly so. But it’s acareer change rather than some sadistic, jealously-fuellingshowpiece.

Aside from the predictable radio-friendly bulk, the only trulyuncomfortable moment comes in the form of Turn Me On; a sex-ravished,sweaty and slightly uncharacteristic number, with Blunt – hair fullyswept back – crying “underwater, with someone’s daughter, gonna makeyou a dirty woman”. For a bog-standard piano ballad, for This Love Againto follow immediately after the pulsating frenzy is even more perplexing.

But when Blunt sticks to playing it safe, he offends the least. Andwhilst it seems contrived to applaud an artist for sticking to hiszone, this man is an exceptional case. Although short of adefining track (Calling Out Your Name is the standout, at a push),Some Kind Of Trouble is crammed with playable songs, unimaginative andglossy as they may be.

And so the wiseman lives on, continuing on his journey of hitrecords and luxury apartments. This album, like all of those thatpreceded it and will doubtless follow, is made to sell. But you can’tblame a man for making the most of a lucky strike.