James – Girl At The End Of The World 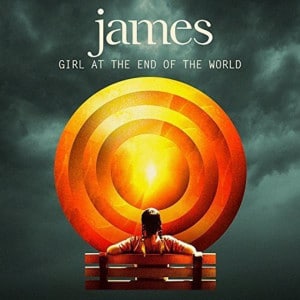 Thirty years after their début, James’ 12th full-length studio album Girl At The End Of The World shows the band still has a lot to offer. They’ve had plenty of ups and downs in their career, but they’ve never stagnated on a journey that has seen them reinvent themselves several times over: from jangly indie guitar rock and baggy/Madchester psychedelia to a more ambient, even experimental sound with Brian Eno.

James’s previous offering La Petite Mort (2014) was a moving exercise in catharsis based on front man Tim Booth’s personal lyrics about mortality. Though by no means without its miserable moments, Girl At The End Of The World is overall a much more positive and uplifting album, even if it doesn’t have the same emotional depth.

Made with the same producer Max Dingel (plus input from long-time collaborator Eno), the new release sounds quite different. Without being out-and-out electronica, Girl at the End of the World foregrounds keyboards over guitars and mixes in dance beats: the band may be well into their fifties now but the music crackles with youthful verve.

Bitch is a great opener. With the vocals not entering until about halfway through, the track is driven by Jim Glennie’s pulsing bass and Mark Hunter’s shimmering synths. It has a krautrock/early New Order feel, fizzing with nervous energy as Booth characteristically gives vent to his self-directed frustrations. To My Surprise is also edgy synth-pop, with Booth angrily asking “Were you just born an asshole?”

In contrast, the euphoric message of Nothing But Love is loud and clear: “Nothing but love gives the world some meaning.” Stretching a bit too hard for Sit Down sing-along anthemic status, it features a big chorus with soaring group backing vocals. Attention is an equally affirmative love song, starting as a piano ballad but turning unexpectedly into a pumping dance number with a techno vibe.

Dear John is a bubbly synth-led song about ending a relationship: “I wrote this song to tell you I’m leaving you / Afraid to say these words to your face / Must be better than a letter, text or email.” In Surfer’s Song the sound matches the words, with David Baynton-Power’s heart-beating drums building up tension as Booth’s vocals ride the crest (“All these thoughts cascading over me”), then are almost drowned out by a wave-like crashing of synths.

Catapult has a hard-edged, electronic groove, while the upbeat Move Down South is built on a pounding beat and echoing twangy guitar from Larry Gott. In Waking, Andy Diagram’s fine trumpet playing comes to the fore, with the title track ending the album on a hopeful note, still chasing the dream.

There are a couple of fillers on the album, but Girl At The End Of The World is a strong, distinctive addition to the band’s work. It’s good to see that James’s restless creativity continues unabated into their fourth decade.