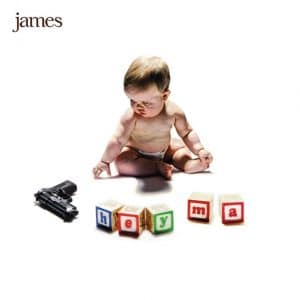 This wasn’t supposed to happen. But then with all the band reunions taking place over the last couple of years, the reigniting of the James fires had a certain inevitability. The group’s critics will, of course, be totally unmoved at the prospect of a rejuvenated Tim Booth crusading at their ears once again, but for others such as yours truly who regard the band’s work with Brian Eno as verging on the masterly, it’s a privilege we didn’t expect.

It’s clear this isn’t a return with an eye on the cash till either – James are back because they have fire in their belly and music to stoke it with, and it shows in the depth of emotion unleashed by this album. They just happen to be best making it together. Booth leads the charge, going for broke against a whole range of issues, but in doing so sounding more at peace than he has for a while.

Setting out their stall with the strength and affirmation of the birth song Bubbles, seemingly inspired by the arrival of Booth’s first son, James gather themselves with an impressively solid stature. And it’s straight from birth to death, the title song dealing with the Iraqi war, and “the boys in the body bags coming home in pieces”. It ought to be an anthem, but if it is, it’s a gruesome anti-triumph.

Elsewhere the band stick close to the Eno production aesthetic, though the producer was seemingly absent for the reunion. Boom Boom constructs a beautifully orchestrated coda that confirms the influence. Whiteboy makes use of the lean piano that characterised some of the best tracks on Millionaires. Only on the bright Upside does the introduction of Andy Diagram’s trumpet sound like a step too far in the brash coda.

“I’m so cynical I can’t change,” sings Booth as he tells of bathing in a waterfall in America. “We survive in spite of a desire to stray” he offers on Semaphore, which sounds like preaching to self over icy keyboards. Not much has changed lyrically then – but this isn’t the self-importance the band has occasionally strayed in to, this comes from deeper personal experience.

The return of James, then, was only likely to lead to one of two things – a misguided mess or a triumphant heralding of a phase for the band. The latter is the case here.