by Graeme Marsh
published: 27 May 2014 in Album Reviews
Tweet 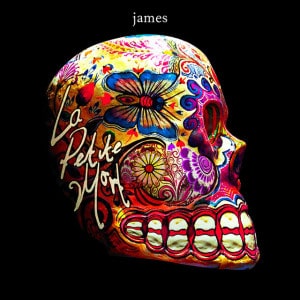 Since 1986, Manchester’s darlings James have notched up 12 studio albums – not bad considering a five year hiatus that ended with a welcome return in 2007.

‘The Little Death’ – the literal translation of the 13th release – is actually an idiom for any kind of release in fact, with ejaculations referred to in this way more than anything else. But the overall theme is indeed one of death, as Booth attempted to come to terms with the passing of both his mother and a dear friend that introduced him to his wife.

Recorded over two years in a number of locations including Scotland and Manchester, La Petite Mort has been produced by Max Dingel (of White Lies amongst others) and he brings a thick layer of the sheeniest sheen to the finished article, but it’s this pristine polishing that ultimately holds back a number of very good songs.

The classic four chord sequences that have adorned such favourites as Getting Away With It (All Messed Up) are present and correct for the opening and closing tracks. The seven minute Walk Like You opens proceedings, an epic about life moulded by parents. The track builds in familiar crescendo style before a quiet break precedes a separate section where repeated lyrics build again, the song structured similar to English Beefcake from 2001’s largely overlooked belter Pleased To Meet You. It doesn’t quite explode though, Saul Davies’ violin led passage lacks some classic, frantic instrumental accompaniment and Andy Diagram’s trumpet sounds muffled and tagged on as an afterthought. For all its over production on the record, this brilliant track will explode in a live environment when Booth’s thrillingly erratic dancing is sure to appear.

Closer All I’m Saying is another to rival some of the classics – again, when played live it’s likely to be massive. This version, though, feels as if it’s lost some of its essence, particularly when a cacophony of sound should occur halfway through the song; the repetition of “oh oh oh oh oh oh oh” is instead then repeated by a guitar line before touches of muffled trumpet appear again. Frustratingly close to perfection.

Album pre-release Frozen Britain is another very good track, the catchy chorus of “Emily come to bed” excites despite the slightly subdued instrumentalism while first single Moving On also benefits from infectiousness, Jim Glennie’s twanging bass driving it on before the chorus attempts to reach familiar, anthemic heights. The brass touches again, though, sound watered down.

Curse Curse sounds like the band attempting to be something they’re not, with techno touches providing a rave feel; a TV is turned on to drown out sexual noises from next door, just as Messi shoots and scores at an appropriate moment in the Copa Del Rey– come on boys, Messi is so last year, it’s all about Bale now!

Interrogation is possibly the album’s strongest song despite being given away as a free download to subscribers to the band’s official mailing list: the trumpet sounds more authentic, a faster beat carries it forward through its sparse beginnings before the song builds into a spine tingling chorus.

A pounding bassline thuds out a rhythm during Gone Baby Gone but the song suffers from a lyrically simple, repetitive chorus; again it’s not a bad track, but the production holds something back as it all sounds toned down. The slow and turgid Bitter Virtue, though, falls short as probably the weakest song on the album reveals itself. A couple of piano led tracks take the album in a slightly different direction: firstly All In My Mind provides a mellow break. Rising and falling piano scales then adorn Quicken The Dead, the cut reminding of the title track from 1990’s Gold Mother.

Bookended with two (almost) James classics, the album’s probably better than expected, so it’s somewhat of a disappointment that the band haven’t been encouraged to recreate their main strength, the brilliant electricity generated by pulsating live shows as their music builds into euphoric peaks; too often, the production strips away the potential majesty. “See you next time”, sings Booth as All I’m Saying concludes. Yes, you will Tim. But sort out those over production issues and you’ll see a lot more of us too.