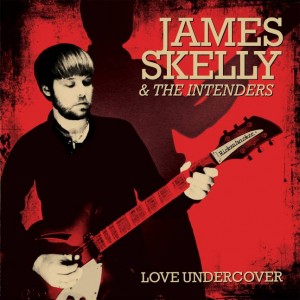 Though far from original, The Coral were one of the most accomplished indie guitar bands to emerge in the noughties. Their late-’60s-style psychedelic folk rock may have later given way to “straighter”, more middle-of-the-road pop, but they’ve never been short of good tunes. Now their main songwriter and lead singer James Skelly has branched out on his own side project – supported by various members of The Coral and other musicians.

Though ‘and the Intenders’ suggests this is a collaborative band effort, Love Undercover seems like a solo album in all but name, made with a little help from his friends, as Skelly not only sings his own songs but is the producer, too. Since The Coral’s last album, the disappointingly bland Butterfly House, which came worryingly close to easy listening, three years ago, drummer Ian Skelly has already released a solo album, while rhythm guitarist Lee Southall’s collaboration with singer Molly Jones is due out later this year. Has the front man himself got anything new to offer?

The short answer is not really. Yes, Love Undercover does sound a bit different from The Coral’s material, with a more soul and R&B influence, not to mention Merseybeat, but there is nothing particularly distinctive in the music. In contrast to younger brother Ian’s rather successful re-immersion in summer of love psychedelia in Cut From A Star, James has followed the path of direct, accessible pop-rock, with few surprises. While as always nicely crafted and blessed with a real gift for melody, the songs do feel slightly tame overall. Skelly’s upfront vocals remain strong with the lyrics pleasingly audible, but it’s not clear that he has anything urgent to say.

The album opens fairly promisingly with an upbeat Motown-style love song You’ve Got It All, the second single, co-written with Paul Weller. It is followed by probably the best track, the first single Do It Again, an aggressively earthy blues rocker, featuring slide guitar and honky-tonk piano, with Skelly snarling “You tell me you don’t want anything I’ve got / But you take it all the same” and ending with Howlin’ Wolf-like baying cries.

In Here For You, Skelly reaches for a more soulful expression of heartfelt support, albeit the watered-down, blue-eyed variety, while the mid-tempo, countryish Sacrifice is about refusing to be a victim of love: “Bet you think it’s something / To make a fool out of me.” Searching For The Sun chugs along dreamily in the middle lane without really going anywhere, and the cornily romantic You And I has a Latin dance groove.

Set You Free has an insistent, pulsing beat running through it that gives some welcome urgency to this exhortation for the liberating power of love. Turn Away, a soft-centred, piano-led ballad about nostalgic heartbreak, is offset by the carefree catchiness of What A Day. I’m A Man is a more gutsy, self-affirming song backed by trumpet: “You’ll never take my soul.” The album closes with the haunting Darkest Days, its steady clip-clopping beat eventually receding into the distance, before a gently echoing piano finishes off.

It will be interesting to see if this excursion from Skelly, or those of the other band members, feeds back into The Coral’s seventh studio album, apparently already in the making.

James Skelly and the Intenders MP3s or CDs

James Skelly and the Intenders on Spotify