James – The Morning After 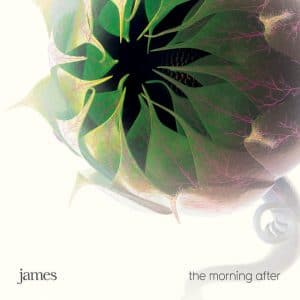 James‘s second mini-album of 2010, The Morning After, is the natural follow-up to The Night Before. As their titles suggest, the two complement each other, but they also convey two different moods: in contrast to its predecessor’s more upbeat, brash excitement, The Morning After features slower, quieter tracks of introspective contemplation in the cold light of day. These eight low-key songs about the fragility of life and relationships, with their stripped down sound, may seem a bit depressing but their muted beauty lingers in the mind.

The highly effective opener Got The Shakes starts with bluesy slide guitar, as the singer – sounding like he’s got DTs after a night of heavy drinking and possibly violent behaviour – guiltily pleads with his partner – “Don’t tell me it’s over / Please wait for me / I swear I’ll go sober” – and ends with an insistently repetitive distorted chorus like a throbbing hangover.

Dust Motes is a movingly painful acceptance of mortality inspired by the death of front man Tim Booth’s mother: “If you die, I forgive you.” Beginning quietly with piano, the first half of the song is slow and subdued, eventually taking off as emotion pours out before closing plaintively with only piano again.

Tell Her I Said may step up the pace a bit, but it also deals with the transience of life in which “No one chooses to grow old”. The rather underwhelming Kaleidoscope is full of melancholic resignation, while Rabbit Hole communicates self-questioning doubt.

The standout track, Make For This City, makes good use of elegiac cellos in its contrast of an idealised vision of an inclusive, interactive urban lifestyle with a drab, metropolitan reality where no one looks anyone in the eye: “On the Underground we all look so run down / On the Circle Line forever going round.”

One of the most thoughtful lyric writers Britain has produced in the last 25 years, Booth here uses the full range of his voice, while the rest of the band are also in good form. Although The Morning After’s mood is distinctly downbeat and does not have the same direct appeal as The Night Before, the songs are often touching and grow more so with each listen.