James – The Night Before 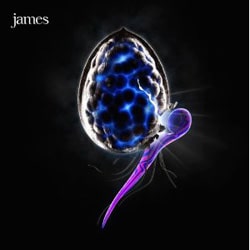 Veteran Mancunian indie-rockers James are back with mini-album The Night Before, with another one entitled The Morning After promised for later this year. Quite why they didn’t wait a bit and deliver one fully-fledged album is a mystery, but what’s provided here is still a tasty light meal.

Their heady Madchester days from the early ’90s may be long gone, and the career-changing Brian Eno-guided adventures over, but their 2008 comeback album Hey Ma showed that James have still got plenty to offer. With the same producer Lee ‘Muddy’ Baker (who also helmed frontman Tim Booth‘s 2004 solo album Bone), The Night Before is a similar mix of power pop and spaced-out rock.

The underwhelming opener It’s Hot is an upbeat, keyboard-driven song, whose feelgood message about how we should “melt our differences” in “a leap of faith” is as bland as the music. The single Crazy is certainly the most radio-friendly track, featuring a soaring chorus built around Booth’s happily stuttering “I’m not c-c-cr-crazy/ I’m just laughing at myself”. But the mood temperature drops in the affecting Ten Below, with its sombre bassline and lost childhood lyrics: “So I’m on my own/ Far from my broken home.”

The outstanding Porcupine is a hauntingly beautiful song about how sometimes we need to cast aside our self-defence mechanisms – “I can put on quite a show/ But inside I’m broken” – featuring some lovely Edge-like slide guitar. The echoing guitar on Shine also evokes U2 (occasionally James can sound like a toned-down, or less bombastic, version of the Irish stadium band).

Dr Hellier is an out-and-out driving rocker, a rousingly riff-ridden adrenaline-pumper, even if its earnest anti-Iraq War proselytising is tiresomely heavy-handed. Unfortunately, though it contains some nicely phrased lyrics – “You think you’re strong/ Measure your courage in empathy” – musically the mediocre mid-tempo Hero makes a disappointing closing song.

But overall The Night Before will be welcomed by James fans, even if it probably won’t make new converts. It’s good that one of the most underrated bands of the last 25 years are still producing such fine material.